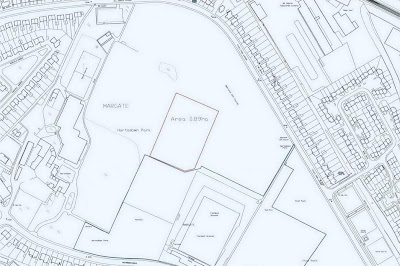 A quick look at the other local blogs reveals one local news story from Simon Moores on Thanet Life see http://birchington.blogspot.com/2011/01/game-of-two-halves.html this is about the planning application for Hartsdown Park and Margate Football Club, not something I know much about.

I thought the application that was causing so much trouble was F/TH/10/0115 approved 15 Jun 2010 and that what really annoyed people was that the application signs only appeared on the gates of the football ground an not anywhere near the bit of the park effected.

I wouldn’t expect this planning permission to expire for several years.

The detail above shows just how drastically these plans cut up the park.

My understanding from a historical point of view, is that the original owners of this land were the Hatfeild family who were a family of very high repute and mixed in the highest of circles.

Word is that they were hosts to no fewer than three prime ministers there at Hartsdown House, including Winston Churchill who stayed there for two months.

I am not really sure that the council can just do what they like with this land, as I thought part of the agreement signed by the Hatfeild family when the land (800 acres) was left in perpetuity to the people of Margate, was a vast array of covenants which cannot be rescinded.

Word is that these even forbid even vehicles entering the park, let alone digging it up and putting a football pitch and hotel in the park.

I hope the council isn’t off on one of its missions to pour vast amounts of council tax into the pockets of lawyers, because they have failed to consult local people properly.

I am afraid the Margate isn’t really my remit so if anyone understands what this is all about please leave an explanatory comment.

There is also an article in this weeks gazette about the issue see http://www.thisiskent.co.uk/where/thanet/Redevelopment-park-gets-ahead/article-3069571-detail/article.html perhaps this is a tale of two planning permissions. 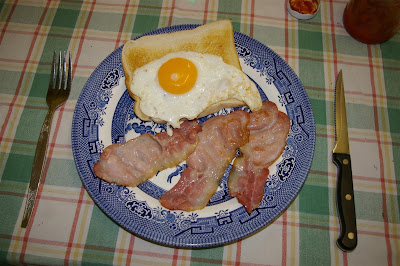 Don and the Big Breakfast

Don on Promote Thanet has some articles about healthy eating and alternative medicine including one on the 3lb fruit breakfast, I think this may be something to do with natural gas, see http://promotethanet.blogspot.com/2011/01/five-day-confusion.html 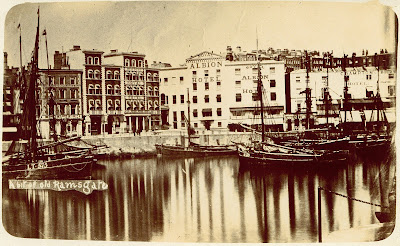 I took a few pictures of Ramsgate Harbour area when I went for my walk this morning, fraid I have been a bit lax on the picture taking front recently, they tend to get a bit boring as I don’t often get time in the morning to go to other parts of Thanet, here are the links to the pictures.

I will ramble on if I get a chance 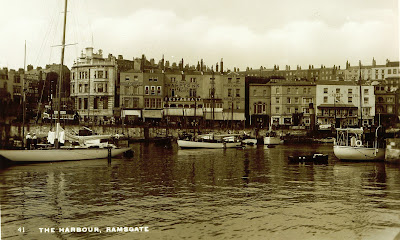 We went to Broadstairs this afternoon, I bought some books in the Broadstairs Bookshop (the small one in Albion Street near the bottom of The High Street) some for me some for my wife and some for children and some for stock, bit of a busman’s holiday I know but we also got a walk and an ice cream in Morelli's.

I tried to take some pictures, first the camera battery went flat so I tried taking still on my camcorder they come out rather small and fuzzy see http://www.thanetonline.com/laptop111/index.htm the few I took with my normal camera are at the bottom of the page. Then the camcorder decided it didn’t want to take any more so I tried my phone see http://www.thanetonline.com/laptop111/id3.htm even worse.
Then when I went to publish them the michaelsbookshop.com website was misbehaving so I published them to thanetonline.com not a good technology day, fortunately the ice cream was excellent. 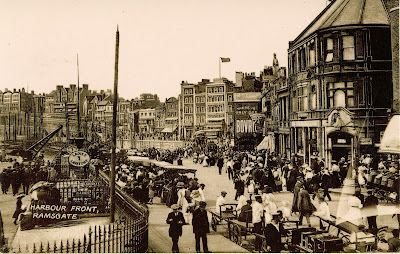 During the course of discussions with one of the councillors about other matters last week, pointed out that the current administration is held in pretty low esteem at the moment. It’s always a bit hard to gauge these things and I suppose one would expect this at the end of a second term, a lot of what I hear is from customers in the shop and their feelings usually stem from some experience dealing with the council, rather than the overall state of Thanet. The main recent change of attitude I have been hearing is from local journalists and I think this is mostly due to the way the leadership consultation was managed. I think up until that the councillors were at least paying lip service to representing local people’s views, since it happened I have discussed it with several councillors and council officers frankly they seem lost for words. They try to swing the conversation round to the result i.e. the benefits of the different type of leadership but when pinned down to the way the decision was made, I am yet to hear a coherent explanation from any of them. What did surprise me though is that the councillor who I pointed out the low esteem the current administration is held in seemed to genuinely think that the opposite is in fact the case. 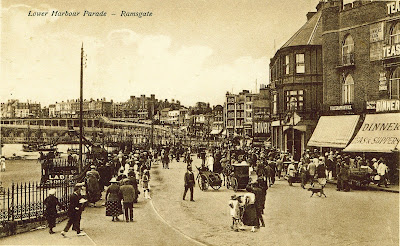 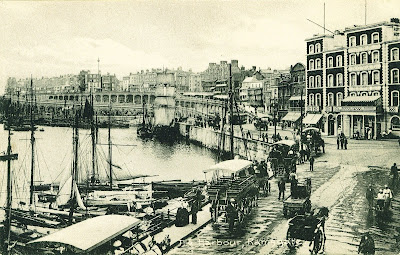