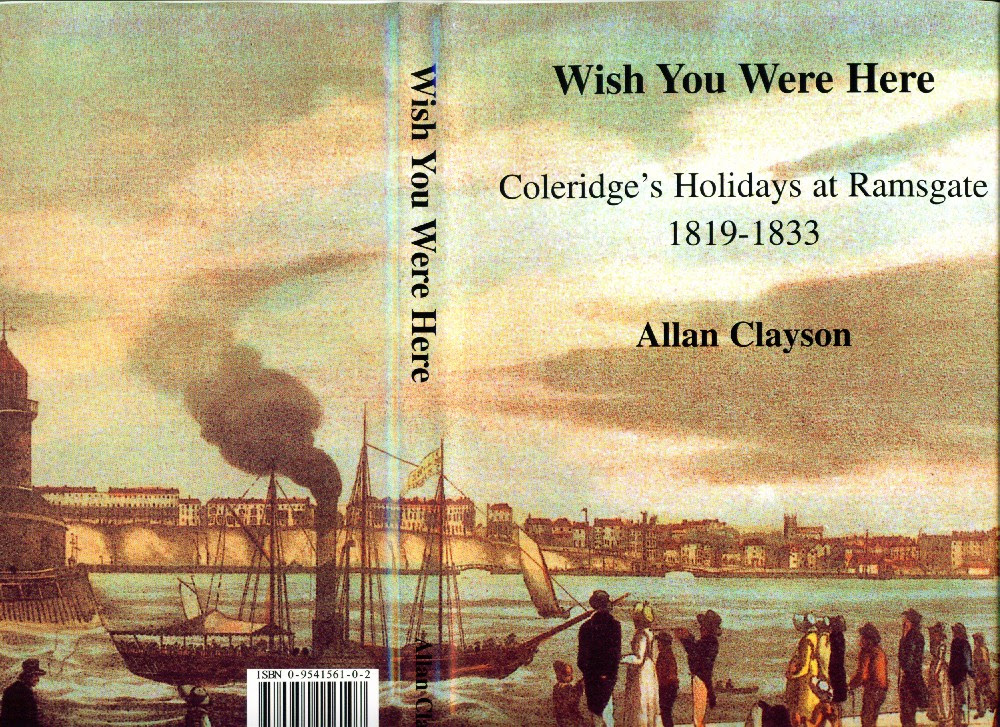 I have managed to acquire some stock of Allan Clayson’s book which I am selling for £9.99 Amazon have it on special offer at £18.95 so it is a good opportunity to acquire an important local book economically. Unfortunately Allan died recently however his wife said that he left some material for some further publications, which I hope to be able to publish in the fullness of time.

Wish You Were Here: Coleridge’s Holidays at Rams gate 1819-1833 is a wide-ranging study of the Ramsgate that Coleridge knew in his sunset years, and the many holidays he passed there. Samuel Taylor Coleridge (1772-1834), author of ‘The Ancient Mariner’ and one of England’s greatest poets and writers of prose, spent a summer month in 1819, six weeks or so every autumn from 1 821 to 1828 and a final Indian summer there in 1833. He wrote over fifty letters from Ramsgate, and while there made numerous entries in his notebooks.

He was always accompanied by one or other of his minders, the Highgate surgeon James Gillman and his wife, with whom he resided for the last eighteen years of his life in an attempt to control his opium addiction. They regularly took accommodation on Ramsgate’s East Cliff — generally in Wellington Crescent or the Plains of Waterloo, and many of these houses are still identifiable.
In Ramsgate he met not only old friends and writers but local worthies like Sir William Curtis and even national figures like the Prime Minister Lord Liverpool. Furthermore, he took an informed interest in local affairs like the consecration of St George’s Church (1827) and the dedication of the Montefiore Synagogue (1833).

He visited Ramsgate for the sea-cure, and he records his ‘sea-baths’ in minute detail; also he was a pioneer of travel by paddle-steamer, and one of its earliest champions. In addition there are good grounds for believing that he composed or polished two or three of his better-known later poems in Ramsgate, while he carried out in the town the restructuring of the great religious prose work of his declining years, Aids to Reflection.

His letters and note-book entries are a delightful mixture of serious concerns and amusing anecdotes, and add considerably to our knowledge not only of the resort in its late-Georgian heyday but of one of the country’s greatest writers and thinkers. His illustrious presence in the town has been neglected for generations by the local townspeople and Coleridge scholars alike, and it is hoped that this book will in some ways redress the balance.


Jacket Illustration: The Royal Sovereign entering Ramsgate Harbour (1826) [by courtesy of Kent Arts and Libraries]
Posted by Michael Child at 11:35