Reminder that the informal Manston DCO consultation presentation is being held by RiverOak in Ramsgate tomorrow, quick sketch on Westbrook beach this evening and some thoughts on the consultation.

I am assuming that most people have already been to one of the informal Manston DCO consultation presentations, but if not the last one is being held at The Comfort Inn in Ramsgate tomorrow between 10am and 4pm.

I went to the one in Canterbury on Thursday as it was the only one I could get to. I had a long and constructive conversation with one of the environmental experts on the water, noise and air pollution elements, something that I think will make it easier for me to comment constructively on the consultation.

I then went on to ask about deliverability, who are RiverOak and how do I check their track record?

I pointed out that if this were a UK company I would be able to get basic information from Companies House and that my efforts to connect RiverOak with either any other airports or any significant investment in any other area had been unsuccessful.

The answer I got was that RiverOak are a private investment company and this meant that there was no track record or company information available in the public domain.

I then asked about the two RiverOak websites, the UK and the American one.

These both appear to relate to the same company RiverOak Investment Corp LLC.

The American website, up until recently had the same Executive Management as the UK site and a considerable amount of non specific information about their experience and activities in aviation. It also included pages about their activities related to Manston. Now all of the information implying that RiverOak are major investors in European airports or have any plans for Manston has been removed from the American site, along with the names of the some of the Executive Management.

I was told that this was due to website updates.

I then asked about this week’s approval by Thanet Council of the outline planning application for over 700 dwellings adjacent to the end of the runway and asked how he thought this would affect compensation levels and whether he thought the development could be built so close to the incoming flight path.

I was told that the development wasn’t near the end of the runway. I countered that this was the Manston Green application and part of the site footprint contains the runway landing lights.

The RiverOak representative replied that he knew the landowner of the land where the landing lights were and that this was a different application. There isn’t very much you can say to someone you are conversing with under blue sky, who maintains the sky is in fact green, so I switched the subject to compensation in general.

It quickly became apparent that he thought that any cpo compensation would be minimal and related closely to the nominal £1 that the previous failed airport business had exchanged for and not the independent valuation of a 700 acre brownfield site as I had been lead to believe.

I then went on to say that from the perspective of a local resident and businessperson, this was not so much a consultation related to balancing the environmental downside against the economic upside of an airfreight hub, as a choice between the RiverOak proposals and the Stone Hill Park proposals.

It should be appreciated that in this area Discovery Park Sandwich, who are the current owners of the Manston site, have plans for mixed use development on the site. They currently host companies employing about 2,500 people, which is the largest source of employment in this area.  As a local retailer I am only too aware that many of my customers are employed there.


When the RiverOak representative started explaining to me that Discovery Park wasn’t a major source of local employment and inferring that they were in some way not what they seemed, I left as staying didn’t seem very productive.

This does however leave the Manston Green application OL/TH/14/0050 which was granted outline planning consent earlier this week, RiverOak seem to think it is nowhere near the runway and will have no impact on their plans.

Here is a picture showing the Manston Green site boundary in the planning documents and the end of the runway.

I have highlighted both in red on this picture. 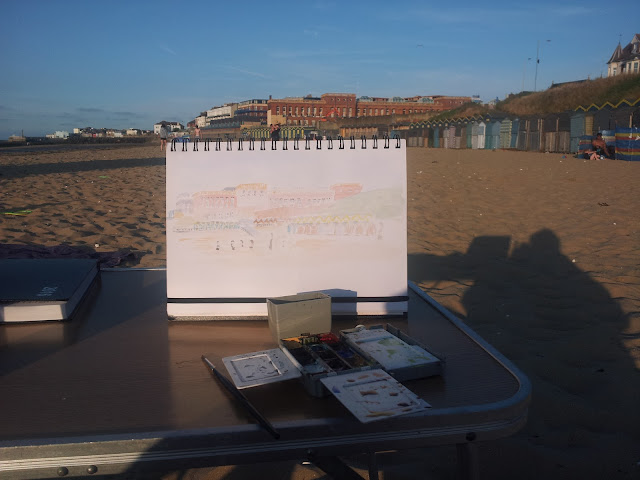 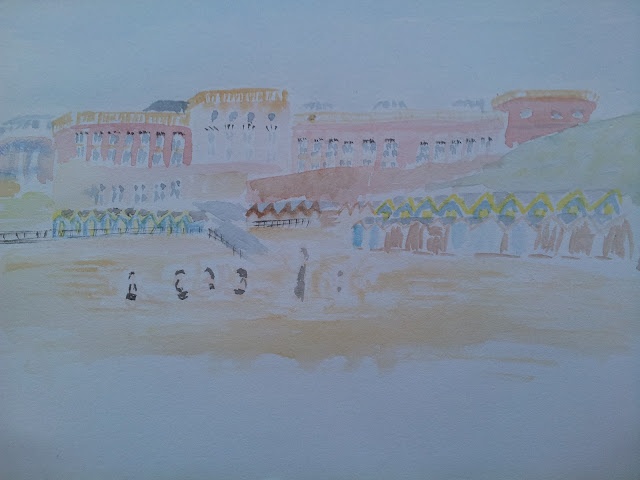 In the past I have done most my sketching on the sand with a pen and then coloured them in with watercolour and a brush, this time I put my pen and fine brushes to one side and used a medium sized brush that goes to a point only. As you can see I have a lot to learn about this type of painting.
Posted by Michael Child at 21:24