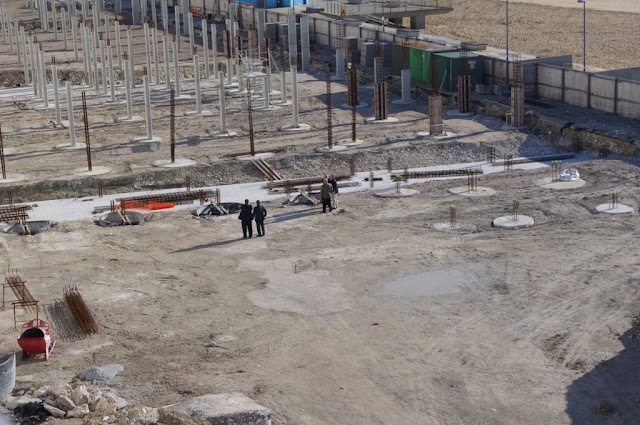 First an update from Cllr Ian Driver who has sent me a copy of an email he sent to the council’s chief executive today.

Thank you for meeting with me last week.

I neglected to mention in my summary of the meeting that Mr Patterson agreed that he would check with Eversheds as to what records they hold on original due diligence of SFP and any other relevant information.

I also forgot to ask at the meeting if I could be provided with a copy of the confidential report on the Pleasurama Development which  went to Cabinet on 16 June 2009. I understand that the constitution allows me to have a copy of this document.

In the meantime I have had the opportunity to see extracts from this report which give me cause for concern.

I am also very concerned by the letters from SBP Banque on pages 17 and 22 of the report. The letterhead of the letter on  page 17 does not appear to me to be professional orauthoritative and is not what I would expect to see in correspondence relating to financial due diligence from a major Swiss bank.

I was also very surprised that the letter on p21 of the report is headed "draft letter from SBP Banque to TDC". Once again this letter does not give me the impression of a professional and  authoritative communication from a Swiss Bank. As the author of the report could you tell me if checks have ever been made with SBP Bank  to ascertain if the letters on pages 17 and 21 of the report are genuine.

If these documents have never been verified for their authenticity then I would respectfully request that you take action to ensure that they are checked, even though time has elapsed since they were written.

Speaking hypothetically, I assume that if Cabinet and Council approved an agreement on the basis of misleading or falsified information then this agreement would have no basis in law.

I apologise for taking up you time with this issue. However I do belevie that the Pleasurama Development is an extremely important matter and the Council should take all reasonable measures to ensure that the the public interest is being served.

I look forward to hearing from you on this matter.

I guess with Ian Driver running the council’s overview and scrutiny we all have to consider the implications of this type of openness and transparency.

Next is the original proposal that was presented to the council, this link takes you to the whole document http://www.michaelsbookshop.com/blogpicts10/id5.htm

This link takes you to a series of pages showing the planning drawings that the council actually approved http://www.michaelsbookshop.com/seafront/

It was these plans that caused consternation among Ramsgate residents, mainly because of the height of the proposed development, which when measured suggested the new development would be as much a 3 metres higher than the cliff top.

My own feelings here is that if the present Labour administration impose this development on Ramsgate, without any transparency or consultation and the end result is anything like the planning drawings suggest it will be then they will make themselves universally unpopular.

Something I find very concerning is the total absence of comment from Ramsgate’s ward councillors.

Alternatively if they go down the road of selling the freehold to obtain short term funding and make no mistake here the long term liability to council taxes of maintaining the cliff to a standard suitable for its proximity to this development is likely to be considerable.


£1m of council taxpayers money has already been spent on it and there has recently been another survey requiring another and considerable amount of cliff works.


While the developer doesn’t achieve anything much apart from the hideous mess that has blighted the main leisure site in the town, this wont be universally popular either.

The Guardian has an article on British Virgin Isles companies today which may interest some readers http://www.guardian.co.uk/uk/2012/nov/26/indentities-behind-secret-property-deals


I am adding an a further update here, first another email From Cllr Driver to the chief executive:

Further to my previous e-mail I have now had the opportunity to study further information which was submitted to Cabinet in June 2009.

On p19 of the report there is a letter from SFP Ventures (UK) Ltd which states that a company called  Wetmore Investments will be the funding the hotel development to the tune of £5million.  This is confirmed on p22 of the report in the "draft letter from SBP Banque to TDC" which I have already expressed my concern about.

I have spent several hours researching Wetmore investments. It would appear that Wetmore Investments have never been registered at Companies House. I have been unable to trace any references to this organisation apart from an estate  agent in the USA. As the report author could I ask you what checks were were made to establish the bona-fides of Wetmore Investments in 2009 especially in light of the fact that documents in the report to Cabinet suggest that it is was to be one of the  major funders of the Pleasurama Development.

At our meeting last week you asked me to let you know if I had any suggestions for the forthcoming Pleasurama due diligence process. After having seen the June 2009 report to Cabinet, I would like to suggest that it would be sensible if the Council conducted thorough checks to ensure that documents from banks and  funders are bona fide and that these organisations actually exist.