Montefiore Synagogue and Mausoleum Open this Sunday from 9.30am to 2.00pm 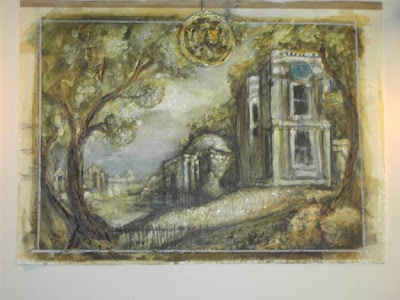 I am reminding people that hats will need to be worn to go into the synagogue, this is a piece of Ramsgate’s heritage not to be missed if you can possibly go don’t miss it.

THE MONTEFIORE SYNAGOGUE AND MAUSOLEUM
Moses Montefiore (1784-1885) was a towering figure of Victorian England, renowned locally, nationally and internationally. The grandson of wealthy Sephardi London merchants originally from Livorno in Italy he retired from the Stock Exchange a rich man to devote his life to philanthropy. He gave generously locally: his mayoral gold chain is still worn by Ramsgate mayors. Nationally he worked for removal of disabilities for all dissenters; he helped establish the non-denominational University College London. Internationally he most famously fought for and helped financially his co-religionists abroad in times of persecution and established a new suburb and industries for impoverished Jews of Jerusalem and of the Holy Land.

He first came to Ramsgate in 1812 on his honeymoon with his wife Judith Cohen, sister-in-law to Nathan Rothschild. After his first visit to Jerusalem he bought, in 1831, East Cliff Lodge with its grounds, now George VI Park. The pious and observant Montefiores immediately expressed their intention to build a synagogue as a private `chapel' on their estate. David Mocatta, a cousin, was hired to design it. He was the first Anglo-Jewish architect, a pupil of Sir John Soane and architect for railway stations on the Brighton Line. Mocatta estimated the cost at between £1500 and £1600 exclusive of the interior which was to cost £300 and £400. The foundation stone was laid on the New Moon of Tammuz (Leo) 5691 anno mundi (1) or 9th. August 1831 in the presence of large numbers of the family; terra santa[sic](2) was placed where the Ark with its scrolls would eventually stand.

It was on Sunday the 16th. June 1833 that the dedication of the synagogue took place.
The Chief Rabbis of both the Sephardi and Ashkenazi communities were present, leading a large and distinguished congregation from all over the United Kingdom.

`The simple building is based on a rectangular plan with canted corners plus a semicircular apse at the back to accommodate the Ark. It has whitewashed stucco walls and a lead roof. The clock on the façade, an unusual feature of synagogues (the most famous being that on Prague's baroque Jewish Town Hall) is inscribed in English with the motto TIME FLIES. VIRTUE ALONE REMAINS. The chiming clock is the only example in an English Synagogue.'(3)

This clock has marked the time for numerous Ramsgatonians, speeding many a schoolboy late for school. Sir Moses Montefiore's arms, by the side of the entrance, are from the now demolished Judith, Lady Montefiore College; they were placed there after 1960.

`The interior: Semicircular stone steps (at north) lead to a tiny vestibule with a marble washstand. The interior of the small prayer hall was originally dimly lit from above by an octagonal dome and lantern of clear and red glass, a feature typical of the Regency, and by a tiny window over the Ark now filled with a stained glass Decalogue. Only later were windows introduced at gallery level. The classicism of the tapering Ark is modified by the lotus-bud capitals, which give it a slightly Egyptian feel.

Other alterations to the interior have somewhat compromised the restrained neoclassicism: the cream, pink and grey granite and marble lining the walls (in 1912), replacement and rearrangement of furniture (by oak in 1933; the Reader's desk is now in the centre) and the introduction of iron gallery supports and stained glass (also 1933). The gallery faces the Ark along the west wall and has a traditional high latticework mehitsah (*). In 1933 the original timber Royal Family prayer board was replaced. It can now be seen at Bristol Synagogue' (4)

The present Prayer for the Royal Family is for King George V and Queen Mary.
In the lobby there is a memorial to a member of the family who was killed on active service at Gallipoli during World War I.

The synagogue is lit by candles in their original brass chandeliers, as at its parent synagogue Bevis Marks in London. Sir Moses' own seat by the Ark is still to be seen as is that of Lady
Montefiore's in the women's gallery (no.3).
The Montefiores travelled widely and visited the Holy Land seven times. The suburb built outside the old walls of Jerusalem, `Yemin Moshe' (the Right Hand of Moses in honour of Sir Moses) had a distinctly English flavour, and one might say even a very Ramsgate flavour: the ironwork is from G S Culver's Ramsgate Metalwork factory and the windmill was based on the Hereson flour mill. It was built by Messrs. Holman, engineers and millwrights, of Canterbury.
The Mausoleum next to the Synagogue is a replica of Rachel's Tomb, on the road to Bethlehem, which Lady Montefiore had had repaired in 1839. David Mocatta was commissioned by Sir Moses to build this mausoleum for his childless wife who predeceased him.

`The Montefiores are laid to rest side by side in brick vaults covered by identical chest tombs of Aberdeen marble. As is traditional the tombs face east towards Jerusalem under a small stained-glass skylight. The floor is of Minton tile. The porch is filled with iron grilles in a Moresque fretwork pattern. The inscription is from the last verse of the Hebrew hymn `Adon Alom'' (5).

The translation from the Hebrew is:
Within Thy hand I lay my soul
Both when I sleep and when I wake
And with my soul my body too,
My Lord is close I shall not fear
Behind the mausoleum is a short stone pillar on a plinth brought back from the Holy Land by Sir Moses. It perhaps alludes to the tombstone erected by the patriarch Jacob over Rachel's grave.
These buildings may remind us of a 19th century link between these islands and the Holy Land and of a devoted couple who were steadfast in their faith, proud forerunners of multi-culturalism in this green and pleasant land.
1. anno mundi: the year of the world or from the creation, as in the Hebrew calendar; in Latin in Montefiore diaries.
2. Terra Santa [sic]: soil from the Holy Land; in Latin in the Montefiore diaries.
3. Jewish Heritage in England, An Architectural Guide by Sharman Kadish
Published 2006, English Heritage: ISBN-13 978 1 905624 28 7
4. Ibid; 5.Ibid; *.partition between men and women
Bibliography: Diaries of Sir Moses and Lady Montefiore.
Memoirs of Ruth Sebag-Montefiore
Bible and Sword by Barbara Tuchman
The Cousinhood by Chaim Bermant
Quotes in italics Sharman Kadish , Jewish Heritage in England, An Architectural Guide; published by English Heritage, 2006. ISBN-13 978 1 905624 28 7
Here you have one of Ramsgate's architectural gems, sadly little used now, please if you have further information about it please send it to me and I will add it.
Posted by Michael Child at 13:35