Thanet seems to have missed out on the OBE stakes for 2014 although a couple fo KCC councillors feature:

The whole list is here https://www.gov.uk/government/publications/new-years-honours-lists-2014  in case I missed someone or something. 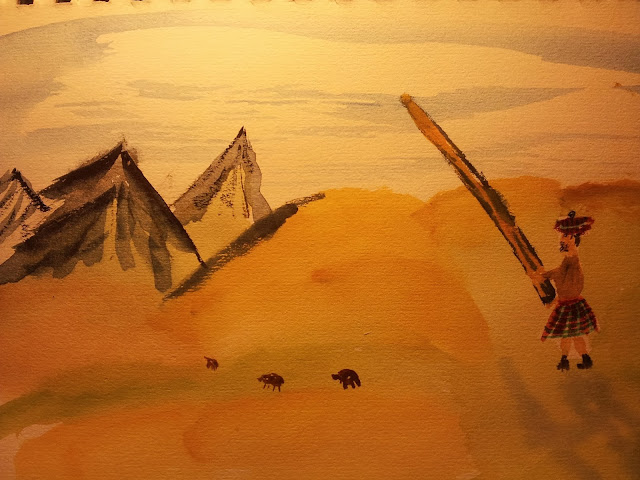 This is a recent photo of highland haggis hunting a popular hogmanay sport apologies for forgetting to illustrate the post earlier.

On to trying to predict something for 2014

As a shop assistant I will start with that.

I think the main recent change here has been browsing the shops and then buying cheaper online, with the smartphone aspect of this being cutting edge at the moment.

I can partly explain this in teams of secondhand books, something I sort of understand, this is becoming a bit of a double edged sword with pretty much everything hanging on the price. In simple terms if the price in the shop isn’t competitive with the price (including p&p) online, then for the most part this spells the end of the shop.

So my prediction here will be more shop closures and I guessing that the balance has shifted so there will be probably more at Westwood Cross than in the Thanet towns during 2014.

Are there any more big skeletons in the cupboard? Not sure here I may come back to this later.

I intend to work on this post on and off today as I get the odd bit of time or I think of something.

Airport
I would guess the airport is more likely to go one way or anther, I would predict that the last fifty years of loss making commercial aviation there will come to an end fairly soon although I am not sure this will happen during 2014 but I would say the sale price of £1 was an indicator.

Pleasurama
With Pleasurama I guess the February 2014 date when the development agreement completion date expires, word on the street is that the developer can’t come up with the funding and isn’t likely to. Despite this I am predicting a long and expensive legal battle between the developer and the council.

Port Ramsgate
I guess Port Ramsgate has a bit of a history of making losses while Ramsgate marina makes a profit as an expensive boat park. The history of this is difficult to extrapolate due some creative accounting where the marina profits and the port losses get a bit tangled up. The prediction here is that the port will produce a loss again.

Pavillion
I guess the big question here is whether Wetherspoons are going to turn the Pav into another Mechanical Elephant, I don’t know what to predict with this one, but will go with it remaining a council owned derry.

Albion House
Well this one is finally under way and should soon be Boutique Hotel, which is what I am predicting.

Tunnels
The tunnels are due to open to the public in June and as they are the largest all weather leisure space in Thanet I am expecting this to be a very significant development attracting more visitors that The Turner Contemporary.

Westcliff Hall
Project Motormouth as it has become known locally still has a very long way to go as far as I can see, so I predicting that this will still be anohtere council owned derry by the end of 2014.

Plans to turn the working slipways into a bar and café have been passed, but the council own the freehold and the lease at the moment stipulates that the site can only be used as a boatyard.

Of course the other side of the coin here is that the developer owns the freehold of The Custom House and leases this to Ramsgate Town Council, so factoring this in I would say it will turn into a bar and café and would expect work to be well underway by the end of 2015.

An amusing aspect of this is that the council has commissioned a boat hoist to replace the slipway but word on the street is that they have ordered the wrong hoist and it isn’t big enough to lift the windfarm cats.

Turner
Well with this one I am still waiting for the first showing of a major exhibition that will be a big draw for the artistic community worldwide resulting in gallery rage queuing and a monetary return for taxpayers, don’t hold your breath in 2014. I am predicting further catalogues where the exhibit numbers don’t match and further mechanical breakdowns.


I am predicting that the days of open anonymous comment will be over in 2014.
Posted by Michael Child at 12:44