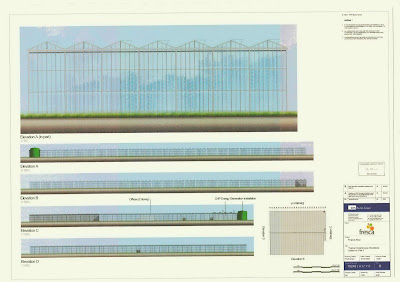 I went to Monkton nature reserve the other day where some of the volunteers there were expressing concern about Thanet Earth, you have to appreciate here that the nature reserve is in a disused chalk pit and that there is now a huge mountain of chalk towering above it, on which the massive greenhouses will eventually be built.

It seemed pretty obvious that many of the people in the vicinity of Thanet Earth had no idea of the colossal scale of this structure, especially in terms of the height of the earth works, it would seem that local consultation was abysmally inadequate.

One thing I noticed that made me chuckle, was the stupid comments by the supporters of Thanet Earth to the effect that much less of our underground water supply would consumed, because the water from its roofs would be used to irrigate the crops inside. What they failed to notice was that as the thing is on top of the drinking water reservoir, the water landing on the roofs would previously have soaked though the ground and into the reservoir.
Posted by Michael Child at 11:47