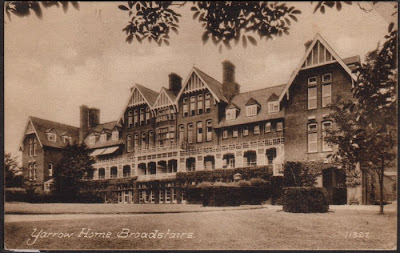 One of my publications that has been particularly popular is Children’s Convalescent Homes of Broadstairs by Tony Euden click her to buy it online.

I have the following from one of my customers who would like to contact other people who stayed there as children.

“Thank you so much for the book The Children’s Convalescent Homes in Broadstairs. It was very interesting reading.

When I spoke to you on the phone, I wondered how I could get in touch with other children who had been at The Yarrow Home. You offered to put it up on your blog. It would be very kind of you if you could do so.

My name was Sally Barns and I was there in the late 1930`s, just before WW11. Perhaps there are not so many of us alive now, but I would be very interested in getting in touch with anybody who was there.”

I have put up some sample text and pictures from the book about the Yarrow Convalescent Home click here to read it.
Posted by Michael Child at 13:43