Royal Sands Development Ramsgate, what are you drinking, the water or the wave? 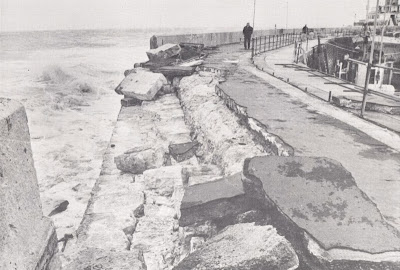 As those of you that read this blog will know I have been very tied up with Pleasurama this week, I suppose the most depressing part of that being that there is really no regulatory body to turn to.

Before my five year long experience with Pleasurama, I had assumed that in this country, if one could provide reasonable evidence that some major project was potentially dangerous to human life, one just wrote to ones MP or local government representative and they would at the very least check what one was saying and if necessary get some experts to investigate what one was saying.

Now after god alone knows how many emails phone calls and the like, here I sit, totally bemused.

The dangerous cliff has been investigated and found to be dangerous, some work has been done to it that appears to have got it from a state where it needs safety rails round it to protect the public, to a state where it conforms to the local norm i.e. it just needs a don’t sit under the cliff sign.

What I haven’t been able to get is a qualified professional to answer the question, how close is it safe to build a residential development to it?

After questions about the flood risk, that I eventually had to take as far as the Local Government Ombudsman, I finally managed to get the Environment Agency to report on the situation.

Yes they concurred with me that there was a serious risk to the people inside the building from a tidal surge storm, but no they couldn’t make either the local council or the developer implement their safety recommendations.

Now please understand here, I am not saying that the building shouldn’t be built because my vague notions as an amateur engineer consider it may be dangerous. What I am saying is that in the light of two reports by qualified experts, employed by government to ensure that the development will be safe, raising concerns about two aspects of the development being potentially dangerous, these concerns should be investigated before more work is done on the site and more money is wasted.

Some quotes from the EA report with a few notes:

“we don't have sufficient information to confirm whether or not the site is vulnerable to waves of a much greater height and if so, if this could undermine the structural integrity of the proposed buildings.”

I take this to mean that they believe some sort of investigation should be made to work out if the building will fall down in a storm, trapping the people inside.

“We are certainly disappointed that access from the development to the top of the cliff, which we believe to have been in the original layout, has since been removed. In the event of the esplanade being impassable, access from the cliff-top would ensure a safe dry route to and from the residential units. As the proposal stands, a serious flood could potentially leave resident' stranded in their homes without a safe means of escape, for the duration of the event,”

I take this to mean, we thought the plans you sent us had some sort of escape for the people to get out if the building starts to fall down in a storm.

“Areas immediately behind defences lie in the High Risk Rapid Inundation Zone (RIZ) and are particularly vulnerable due to the risk of the defences being over-topped or breached, resulting in fast-flowing and potentially deep water with little or no warning.”

This one can be taken several ways, we recommend that all residents are good swimmers could be one, I am not certain that even a good swimmer would want to wake up in fast-flowing and potentially deep water though.

“whilst we accept that this development already has planning permission, we would highly recommend that a full FRA is undertaken which could inform appropriate resilience and resistance measures.”

I take this to mean, we can’t make you get a flood risk assessment but it would be stupid no to.

I suppose with all of this interpreting other people’s signals there will always be a sense in which one is trying to work out whether they are waving or drowning.
Posted by Michael Child at 13:53