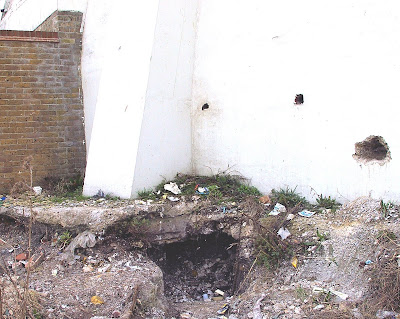 It is good to see that the council are finally taking my worries about this structure seriously, as those of you who read this blog will know back in November when the council told me, as a result of one of my foi requests, that they weren’t going to examine the structure until 2011 I went and did so myself see http://thanetonline.blogspot.com/2009/11/royal-sands-development-how-dangerous.html

What happened next was rather strange, I sent them pictures showing vegetation growing out of all the cracks in the façade, a bulge in part of it and an apparent lack of foundations.

The council investigated the bulge and repaired it, weeded the vegetation out, but said there was nothing wrong with the foundations.

Well it appears that they dug away where the absence of foundations had been crudely covered up by dumping a bit of concrete and what they found was no foundations.

I suppose the pertinent point here is that I pointed out that there didn’t appear to be adequate foundations, both to the council and the council’s advising engineers right at the very beginning of the £1m contract to fill and paint the façade.

The question begged here is why didn’t they investigate the foundations then?

Click on the link for some pictures of the investigations of the façade http://www.michaelsbookshop.com/310/id17.htm the number of exploratory holes suggests that perhaps they should have taken a closer look before spending so much of our money painting it.

The council have also repaired the wall that was sinking into the ground at the top of Augusta Stairs.
Posted by Michael Child at 17:14