Once the second set of plans had been passed I found out the contractor (the second of the four that have intended to build this development) wanted to pile drive on the site.

Now this area is a honeycomb of old tunnels and caves the largest that appears on old maps being Wellington Caves, this is shown as right next to Wellington Crescent and about the size of four of the houses. One of my fears was that if they started pile driving there some of the houses would vanish into the ground.

Anyway the long and the short of it all was that I contacted the people involved asking them to do a proper survey of the area to see if it was safe to pile drive.

I then set about finding out what potential problems building so close to the cliff face could have so I could offer some historical input that probably wouldn’t be available from other sources. 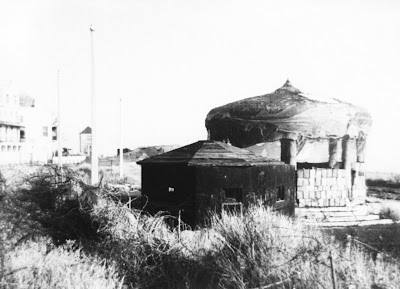 As you can see from this picture (photography was banned here during the war, so it wasn’t that easy to get) there was considerable activity here in World War Two. 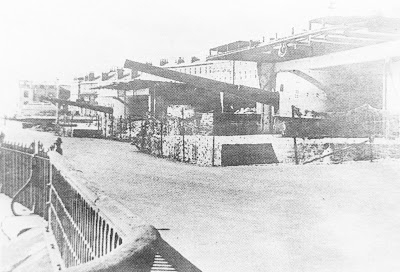 Then I discovered this picture of 6 inch naval guns mounted near the edge of the cliff next to where the new development will be.

Two things occurred to me at this point, one was that firing them could have weakened the cliff and that there was probably some sort of underground magazine that should also be investigated.

It was around this point that it occurred to me that there was a possibility that the cliff could collapse onto the new development, which wouldn’t be pleasant for anyone inside.

This was towards the end of 2005 and at that point I managed to get the opportunity to photograph and study a radar survey that the council had, had done as part of the bandstand and dance floor restoration project.

As some of you will know before I became a shop assistant I worked in engineering, however this survey was out of my depth so I consulted someone I know with a phd in geology.

The survey shows several voids under the concrete dance floor but much more important than this, where the dance floor and the surface next to the cliff has cracked, the water draining into the chalk cliff underneath has been concentrated into much smaller areas than it would have been before it was surfaced.

The effect of the water flowing through these cracks can be likened to the effect of a cheese wire on a piece of cheese and over the passage of time it has cut vertical cracks in the chalk weakening the cliff.

Next enter Augustus Welby Pugin for those of you that don’t know he was a well known architect, probably most famous for his work on The Houses of Parliament.

Pugin designed his own house in Ramsgate “The Grange” where he died in 1872, not so well known is the gallery of caves and tunnels that he built in the cliff next to The Grange. 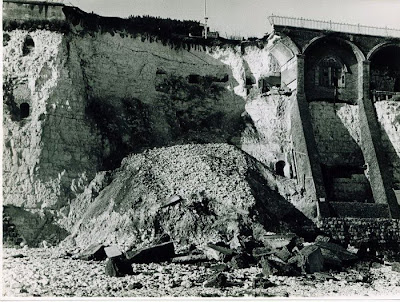 As you can see from the picture it collapsed quite spectacularly. If there is a moral here it is that even very famous architects should be wary of chalk cliffs especially where there is a cracked surface above them.

Unbeknown to me around this time the council also commissioned a report on the condition of the cliff next to where the new development is going to be built, this report was published in April 2005.

Unfortunately for the council the report was very unfavourable, it showed that much of the cliff façade had been poorly constructed, in many places the concrete was much thinner than the design had specified and that in the sea air it had deteriorated considerably.

Most worrying however was that the concerns about the various voids behind the façade and that collapses of these voids could put lateral strains on the façade that it hadn’t been deigned to withstand.

Much of the façade was built in 1936 and some in 1956 as far I know all in all it is not and never has been a very good structure.

This all put the council that wanted to sell the site for this development in a difficult position, the report stated that the work was urgent and should be carried out immediately and would cost over half a million pounds.

The council’s action next was rather surprising what they did was to sit on the report for nearly three years, there was none of the promised consultation about the development and the council’s actions certainly delayed the development by this amount of time.
Eventually I managed to get hold of the report in May 2007 and put some pressure on them to get on with the job.

Eventually the council put aside the money and the cliff repairs started around the end of 2007, I believe they ended up spending the best part of a million pounds of our money on these repairs.

During the repairs it was discovered that within the cliff near to the cliff face was a whole maze of tunnels and caves that formed an onshore naval station together with the old Pleasurama building, this was called HMS Fervent.

When the repairs were ongoing I realised that something was seriously wrong.

At this time it was the intention for the whole development to be built on a flat base at about 6 metres above the datum line used for maps and plans.

When they started clearing the ground down to this level at the western end of the site, next to the cliff face it became obvious that the concrete cliff façade only extended down to about a metre above this level.

Another problem being that much of the exposed area at the bottom of the façade had no foundations.

Their course of action at this point was to stop levelling the ground next to the cliff so as not to expose any more problems and to get on with the cliff repairs as though the absence of foundations could be ignored if it couldn’t be seen. 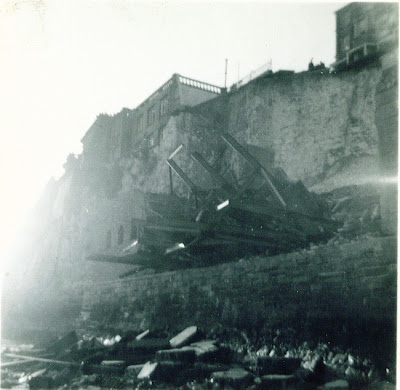 The picture above shows the results of a cliff collapse at the Paragon in the 1950s the structure in front of it used steel girders in its construction and that is what the bent things in the picture are.

Obviously one only has to look at these girders to realise that a cliff collapse could be problematic for the new development.

We now come to the work that was done just over a year ago to repair the concrete cliff façade, after only a year one would expect it to be pretty much without blemish. If you had your house painted with masonry paint you wouldn’t expect much deterioration after only a year.

However what has happened is that a lot of cracks have opened up and vegetation is growing in them, one even has a small tree sprouting.

I have put plenty of pictures of this up recently so I won’t bother again particularly as pretty much everyone in Ramsgate must have seen what has happened.
There is another problem here and that is how they access the cliff face for maintenance purposes with the narrow access road behind the building being the only one.
Click on the link for the radar survey of Wellington Crescent.

Click on the link for some the report on the condition of the cliff, I have all of it if anyone needs to refer to any of it.

Click on the link to look at HMS Fervent inside the cliff.

http://thanetunderground.blogspot.com/2008/10/wellington-caves-aka-hms-fervent.html
Posted by Michael Child at 15:54