Council weed Pleasurama cliff façade and then say they haven’t

Thanet District Council have been removing some of the weeds from the Pleasurama cliff façade, the bizarre question here though is, why would they say they haven’t? 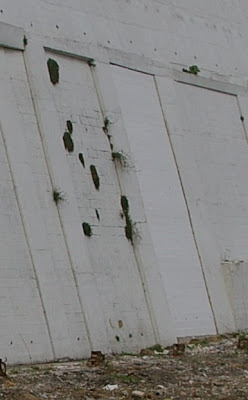 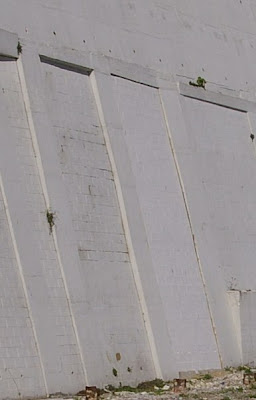 No weeds on Sunday. 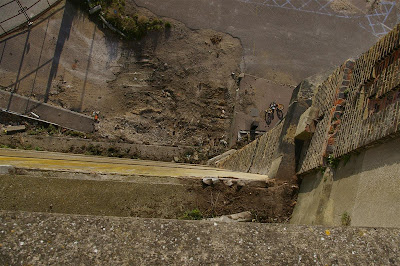 Sorry about the vertigo, at least no one was on the bike when it went over the edge. This is the bit where the stubborn tree was, obviously they managed to get it out. 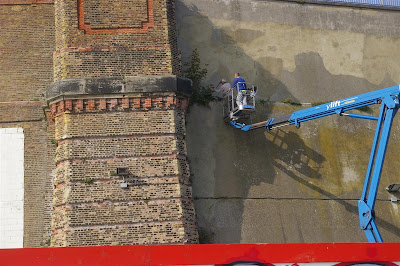 You have to admit it looked a bit touch and go, with the spade and the cherry picker. 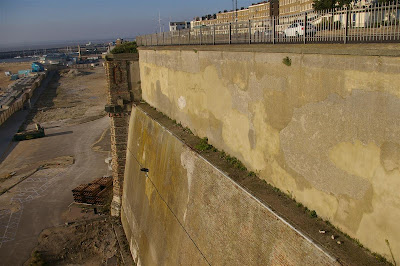 Strange that they have left some of the weeds behind, some sort of selective gardening I thought at first.

What is really bizarre though is that the council say that none of this work has occurred on the bit of the façade behind the Pleasurama site, I quote, from an internal email so I have dotted a few bits out.


“The email from Michael Child refers to a piece of render (approx 1m2)
which delaminated and fell from a brickwork panel just outside the
fenced Pleasurama site at the East end of the site last week. The area
was inspected from a hydraulic platform last Friday …… and it was found that a short section of lead flashing had
failed which in turn lead to the failure of the piece of render. This
section of cliff facade is outside the construction site and not within
the area which received the refurbishment works in 2008 and 2009. This
was a local failure of sand/cement rendering and was not caused by
water
ingress behind the cliff facing structure itself.

Some repair works will be required following the inspection which will
involve pointing to the brickwork, re-rendering and repairs to the
flashing. These works will take up to two days to complete and will be
funded from the coastal maintenance budget.

As mentioned above this issue relates to a section of cliff facade
outside the Pleasurama development site which has a very different
method of construction to the cliff facing structures within the site.
There are therefore no implications as a result of this incident for
The development works on the site”

Sorry it was a bit chomped up due to TDCIT.

This picture shows the cliff façade between the Ramsgate Cliff lift and old tunnel entrance by Augusta Stairs both marked in red.


The Pleasurama site boundary fence is marked in light blue.


The cliff façade can be split into three parts


Green arches built I think in the 1930s

The dark blue lines show where the weeding that I noticed has occurred.

Now follows a long rant about the façade for anyone who is interested.

The arched, green bit, of this façade that appears to be normally constructed and looks like a normal piece of civil engineering, apart from at the base where there is no sign of the load spreading foundations being where the design drawings show they should be. The chalk at the bottom of this part of the façade doesn’t appear to have been disturbed in the way one would expect to dig out for the spreaders, but this is a regular arched structure showing no signs of movement and is probably fine.

My guess is that that it is founded directly on solid chalk without load spreaders, I would think that it has also been keyed into the chalk cliff which would mitigate the vertical load.

It was constructed when the ground below it was used as a funfair and is fairly typical of cliff facades in Thanet.

The portal, yellow bit, of the structure has all of the appearance of having no design at all, I believe part of it was constructed during WW2, the low portal served as an entrance to the tunnels used by HMD Fervent. The building below it abutted the cliff and served as an indoor amusement arcade, it was used by costal command as HMS Fervent.

I believe that the inclined chalk cliff was stepped for the portal pillars and that these were cast onto these steps.

The bases of these pillars appear to sit on made ground, in fact I think it possible that some of the façade was built directly onto the concrete floor of the arcade.

The block infills definitely sit on made ground although there may be some sort of concrete shelf keyed into the chalk behind, which forms a foundation for the blockwork.

Various parts of the main concrete structure of this part of the façade have shifted laterally since its construction the worst part of this was repaired using the anchored concrete badge method, there are brown streaks below the badge that think should be analysed and if they contain iron oxide the badge may need treating as suspect.

Rust there could be caused by spalling of the original structure but could also be caused by the anchors, as the rest of the repair contract has visible faults I have reservations about the way the badge was applied.

Normally the drilling and inserting into the cliff of the anchors is done by a specialist contractor and is unlikely to be suspect.

The block panel adjacent to the lift has no drain holes and the coating applied during the main contract is coming away at the bottom of it, I would think that water is entering from above there.

When the block panel was removed for replacement at the end of last year there was a gap visible between the chalk and the adjacent pillar.

It is important to understand that this concrete façade isn’t designed to support the cliff, in fact it is the cliff that supports the façade, so damaged to the stepped chalk could be very significant indeed.

Finally the mauve part, the one that worries me the most at the moment the part in the vicinity of the blocked drain.

Firstly I should say that I don’t think that this was what caused the render to come off at the weekend, I think this was caused by the roots of the plant growing above it and should be treated as a minor cliff maintenance problem along with the plant growth in the blockwork.

There has been some surface movement in this area over the past couple of years, minor subsidence and lateral shifting.

My main concerns relates to the brick pier (the mauve lump) immediately adjacent to the blocked drain and the panel of brickwork sitting on much more recent blockwork, this area is very uncertain and parts of this brick structure collapsed without warning immediately after being investigated by civil engineers just over forty years ago.

As the cliff is south facing the sun tends to dry out the surface of the brickwork.

I think an underlying problem here may be that the councils advising structural engineers were supervising engineers on the main repair contract.