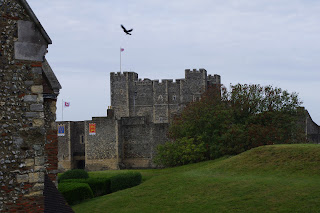 The weather forecast yesterday wasn’t encouraging and the old question of what you do, when you have children, a wet weather forecast and you want a day out in this area raised its ugly head, like the square root of minus one.
The idea being that everyone, adults as well as children wind up feeling as though they have had some sort of weekend break, so Dover Castle was elect. The idea being to do the parts of it that we don’t usually do, church, roman lighthouse, and the tunnels that are just open, requiring no guides or safety elf.
As it was it didn’t rain, so we spent a fair bit of the time outside. I used my large digital camera that has virtually no delay between pressing the button and taking the picture, so there are a lot of photographs, about 500 I think.
The problem was lunch, English Heritage for the most part have greatly improved their cafés and although the price is high the quality is usually ok, they also normally have a range of sandwiches that children will eat.
This means ham without mustard, cheese without an exciting spicy chutney and so on, yesterday they only had the dreaded “adult” sandwiches at around £4 a go, or something that looked like expensive school dinners. The children at the next table were exclaiming about the worst ever lunch and trying to remove the offending ingredients from their sandwiches. Mine opted for a bag of crisps each at 95p a go. I tried the pie and it was reminiscent of school dinners.
What seems to have happened is the healthy option degenerated into something institutional and the only institutional food that children will eat, sos – buger and chips has gone.
Next time we will take our own sandwiches and just drink their tea which while expensive is palatable, as are their jam, cream and scones.
With so many pictures I am bound to get some flack: Why don’t I edit them? Why do I publish the bad ones? Why do I put 100 on a page? So my recommendation is to avoid looking at them altogether.
I should point out that at the time of writing this I haven’t even seen the pictures, the computer is processing them while I am writing, the camera was supposed to rotate some of them automatically, something it doesn’t always do and I will look at them when I get time, just like anyone else who wants to.
Here are the links to the pages of pictures
http://www.michaelsbookshop.com/dover1011
http://www.michaelsbookshop.com/dover1011/id3.htm
http://www.michaelsbookshop.com/dover1011/id4.htm
http://www.michaelsbookshop.com/dover1011/id5.htm
http://www.michaelsbookshop.com/dover1011/id6.htm
http://www.michaelsbookshop.com/dover1011/id7.htm
Posted by Michael Child at 13:56