Update the council have also put up the documents at http://www.thanet.gov.uk/council__democracy/consultation/night-time_flying_policy/infratil_documents_2010.aspx an initial glance suggests there are some different ones.

Here is the link to the page of links to the documents http://www.manstonairport.com/about-the-airport/planning/night-flight-policy.html 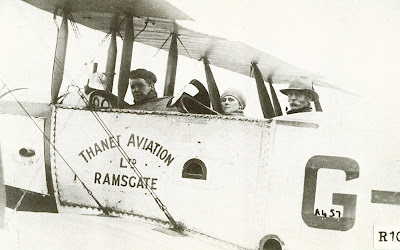 I may add to this when I have read them, an initial glance suggests that the figures for airport expansion and therefore the economic justification are not realistic. This is probably my fault for not understanding them properly. 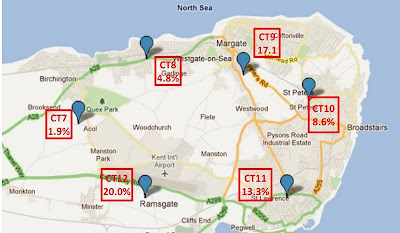 As far as I can work out from the report about 60 people working at the airport live in Thanet and they have provided a map to show their distribution. Oddly enough they seem to have moved Ramsgate. I am sure that this is some mistake of mine, but it appears from the map that the report is confused about the location of Ramsgate.


Please excuse funny tables and stuff appearing here I am trying to produce something that people can actually understand from the proposed night time flying policy.

Having read and attempted to understand some of this proposed nigh time flying document that is published at http://www.manstonairport.com/userfiles/files/Night-flight-policy/Night-time-Flying-Policy-Submission-271011.pdf it seems on the surface that the author has gone out of the way to make it difficult for an ordinary member of the public to understand.
I find this very strange because the whole subject of night time flights is going to public consultation, so one would expect that if the airport want public support in this consultation process, they would want us to support them in their proposals.
The first thing to get sorted is how loud is what, aircraft noise is designated in a scale that goes QC.25 QC.5 QC1 QC2 QC4 QC8 QC16
Aircraft are at their loudest when taking off and as far as I can see the loudest commercial aircraft are Q4 on takeoff, see table below.


Most other UK airports limit the night time planes to those either Q2 and below or Q1 and below, Manston seems to be asking for QC4.


It does appear that what the airport are asking for is for them to be allowed to make the loudest noise that they make during the day, during the night.


It seems that the airport are looking to achieve a relatively high night flying quota in terms of the number of night movements relative to their current level of day movements.

I don’t think a night time quota now can reasonably relate some future level of daytime activity and associated employment, nor do I think the present level of airport employment at about 60 locals on an income of about £20k pa would justify any increase in airport noise.
At a very local level would the 14ish people living in Ramsgate and earning a below average wage justify noise that could damage other aspects of the local economy?
Posted by Michael Child at 19:03