Royal Sands Development on the Pleasurama site in Ramsgate again. 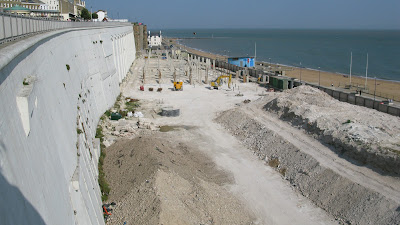 As pretty much everyone in Ramsgate must be aware, progress on the development is still moving at snails pace. The heath and safety notice on the site is a two year one for 200 workers that expires in March, so my calculation that if it takes 200 workers 2 years to build it the four workers on site will probably take 100 years to complete it I think is still a valid one.
So far we have had about fourteen years with this prime council owned leisure site a hideous mess that blights the town, so I periodically tackle the council about it. This is usually a very long and drawn out business and I would imagine it will be about a month before I receive any reply at all.
Last time I did this was in March and I published the replies I got in august see http://thanetonline.blogspot.com/2011/08/royal-sands-development-on-pleasurama.html trying to have a conversation with someone that takes months to reply is a very tedious business, but I am starting the process again. The August replies were not very encouraging.
1.    No records are held of changes to the development agreement on this issue.
1a.    No records of a revised programme are held.
1b.    No records of a public information programme are held.
2.    No material alterations to the approved scheme have been proposed or         approved.
3.    Following the refurbishment work undertaken in 2008 and 2009 a programme     of inspections will commence in October this year. The future programme will be developed following these inspections and until these are carried out the     information that you have requested is not held.
Well you can follow the link to the previous post about the issue if you are getting a bit lost. What I think the council are saying is that have lost all control over their management of this prime site that they are supposed to be administering on our behalf.
It is very difficult to work out what the developer is doing, the development agreement with the council states that he should have finished the pile boring process by the beginning or this year and that by now he should have pretty much completed the steel cage.
This would have been a labour intensive task, creating employment and hopefully a strong structure anchored to the bedrock some three or four metres below the site. What has happened instead is that between two and four workers on site have dug a series of holes about a metre deep and fill these with concrete leaving thin reinforced concrete posts about 3 metres high sticking up out of the ground.
Obviously I have asked the council’s building control department what they think of this, as the building isn’t anchored to the ground as the original project was supposed to be and these thin concrete posts are appearing instead of the steel cage that was expected.
The answer goes something like, we thought that the council’s building control were going to be in charge of this and that we would have considerable control over the construction and the approval of detailed construction buildings, however the developer has used a private firm licensed to oversee building control, so we can’t really say anything. What they have to say off the record, well is off the record, you can always ring them up and have a chat with them.
I suppose the think I find most worrying is that we now have a large development starting on a high risk flood zone, sitting on the old beach that was laid down by the sea instead of one anchored firmly in the solid chalk below it. However all of this is being carries out within the regulations as they stand at the moment.
The failure to comply with the time structure set out in the development agreement with the council is a different matter altogether and I find the fact that the council have made no effort to find out why the developer is so far behind very concerning.
The development now has a website where you can tell which apartment have been reserved, see http://www.royalsandsramsgate.co.uk/availability.asp the server is a bit slow and you have click on a bout 20 links to find out, I think it is about 8 out of 109.

The other big potential hazard to this development is its proximity to the 70 foot high unsupported chalk cliff. The condition of the concrete cliff façade being the most visible problem. This is essentially split into three parts. The brick bit at the Broadstairs end of the site that was built in 1860 and partially collapsed in the 1960s. the arched concrete bit in the middle that was built in the 1930s and seems to be sound and reasonably well built. The bit at the harbour end of the site that has several cracks in it and weed growing on it. So far the developer has only done work in front of the sound looking arched bit in the middle.


So with this rather mixed bag I have to work out what to ask the council, this is a tricky one as it may be a considerable time before I get a reply. This isn’t made any easier because of the problems I pointed out to the leader and chief executive of the council the other day. By this I mean that the officer in charge of this development, head of major developments has gone, and the officer in charge of building control has also gone.
Here are the pictures from the compact camera’s card where I got the picture of the site taken today http://www.michaelsbookshop.com/1011/id3.htm a bit of a mixed bag.


Also in all of this there is what I want to achieve, part of certainly the part of me that is in business in this part of Ramsgate would just like them to get on with the thing in the time frame the promised, well this obviously isn’t happening and isn’t likely to. Another part of me is concerned about the safety aspects of the development, particularly the storm damage and the cliff stability problems.


I would appreciate it if anyone has any ideas on what to ask the council about the development, they would either post them as a comment or email me.


The Royal Sands website http://www.royalsandsramsgate.co.uk/about.asp says: “The Developers for the Royal Sands development are SFP Ventures (UK) Ltd a UK based Commercial and Residential Development Company with experience in mixed schemes in both the UK and overseas.”
I have trawled the internet made a companies house search and yet can find nothing to suggest that they have ever developed anything, even a garden shed.
So if anyone knows of anything they have actually either developed or failed to develop it would be a useful indicator of what we have to expect in Ramsgate.


I will carry on with this post as I get time.
Posted by Michael Child at 16:23