Kiss me quick, I can’t find my little Willie, a ramble about Rodin’s second Kiss now at the Turner Contemporary. 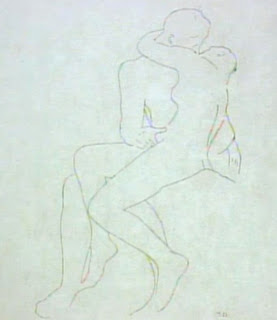 I went to Margate to see the sculpture “The Kiss” by Auguste Rodin (a note here on pispronunciation Rodin is normally pronounced Rodan, the best I have heard so far being Odin, I assume they were going on the R being almost silent in French, who say something like rODan) anyway this isn’t so much bout Norse mythology as Greek.
I wandered into the Turner Contemporary, took a few pictures, mostly trying to get a lot of reflections of The Kiss in Dainel Buren’s mirrors and then sat down to look at people looking at The Kiss. The sequence of events in today’s technological world was pretty much the same, walk towards sculpture, fumble about for mobile phone, camera or other small black technological item, take pictures of sculpture, retreat.
Eventually a chap appeared adorned with enough expensive camera equipment to stock a photography shop and started snapping away like a pro, at this point one of the gallery staff came and told him that photography of The Kiss wasn’t allowed.
This is all rather strange, my understanding was that The Turner Contemporary had banned photography in the galleries upstairs as a lot of the exhibits are still in copyright and with so many artists work on show, sorting out the copyright position would have been pretty much impossible.
Rodin died in 1917 94 years ago and copyright lasts until 70 years after the artist’s death , so what is going on there I didn’t really understand, particularly as you can photograph it when it is in its normal home The Tate Gallery.
At this point I got my sketch book out and put my camera away, I haven’t yet been ticked off for sketching in an art gallery, so this seemed a fairly safe option.
The Kiss on display in the gallery is the one I always think of as the second kiss, the first one that Rodin did was commissioned by the French government in 1888 and is now in The Rodin Museum, this one was a copy done by Rodin for a private commission. So when some sculptor says something about revealing the shape that was already there in the stone, in this case several tons of marble, you may wonder what they are blathering on about.
The history of this second kiss is rather amusing, it was commissioned by the American collector Edward Perry Warren, Edward Perry Warren was gay and apparently saw Rodin as the modern inheritor of the classical Greek tradition.
Anyway he wrote to Rodin asking that the man’s genitals be clearly sculpted in the Greek tradition, rather than modestly hidden. Warren paid 20,000 franks a lot of money in about 1900 and when the sculpture turned up things on that front were a bit disappointing.
Warren put the sculpture in his stables where it stayed for ten years, in 1952 The Tate organised an appeal for public donations and bought it for the nation for a knockdown price of £7,500.
We now have a situation where the standard Tate loan agreement says no photography so lots gallery staff time is wasted telling people not to photograph the thing, I will endeavour to sort it with the Tate for the Turner.
A point here about copyright and galleries, when a gallery says that a photograph of an exhibit they have where the a artist has been dead for over 70 years is copyright, the copyright they are referring to is that of the photographer who took the picture of the work of art, not the work of art.
The picture above is of the Kiss etching by Marcel Duchamp, with the repositioned hand that I mentioned in a previous post.
I have been trying out a compact camera, but the delay on it is too long, so I will have to find something else, pity because the picture quality is OK, anyway here are the pictures I took in Margate yesterday http://www.michaelsbookshop.com/1011/id5.htm not many because I lost patience with the camera.
Update, the Tate have agreed to relax the photography restrictions on The Kiss and as the Turner Contemporary have removed the note that photography of The Kiss is not allowed from their website, it would appear that the situation is resolved.
Posted by Michael Child at 16:55