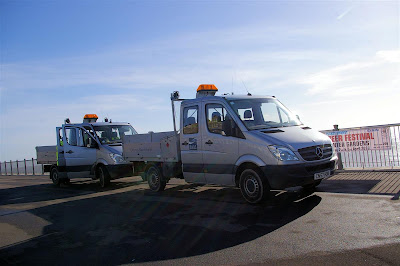 I managed to get out for a bit yesterday and this morning, click on the link for the pictures http://www.michaelsbookshop.com/410/id3.htm the pretty stiff cold wind on both occasions means that there are not that many of them.

Although theoretically Good Friday is a bank holiday I pretty much always feel obliged to open my bookshop for at least the middle part of the day, people now expect shops to be open then.

Anyway a few thoughts on the pictures. The winding house for the two smaller slipways seems to have got into a bit of a state, never an attractive building – I think it was put up during the war and that the slipways were built to service MTBs and other relatively small naval craft, but will have to check my fact on that one – I am not sure if it is made of corrugated ferro sheets or asbestos, so there may be an elf and safety issue too.

I have noticed that these two slipways have hardly been used recently and I suppose it must be difficult for Ramsgate’s rather dated outdoor slipway facilities to compete with more modern indoor facilities, many of which are on the coast of continental Europe and not very far to take a boat.

With the maritime museum closed followed by this, the other buildings there and the pavilion then the Pleasurama site then the Marina Restaurant, what should be an attractive part of the town isn’t.

With the business with Marlec Marine Ltd see http://eastcliffrichard.blogspot.com/2010/03/council-tries-to-ruin-local-business.html and today’s Isle of Thanet Gazette and the failure of the council to grant security of tenure for the maritime museum, one does wonder if TDC are trying to finish the town and harbour off.

Yesterday was a particularly low tide and at least the dredging work still seems to be going on, lets hope they do all of it including the inner basin.

Two council vehicles can be seen parked right on the cliff edge immediately above where problems with the cliff façade foundations have recently been excavated, see http://thanetonline.blogspot.com/2010/03/pleasurama-cliff-facade-finally.html this really is a very strange way of behaving.

The large newly rebuilt shop near to Waitrose in Queen Street has notices on it saying that they are applying for a licence to sell alcohol to be consumed off the premises, it looks as though another convenience food shop.

The increase in the number of food retail outlets in Ramsgate town centre recently is considerable and I am wondering how the very large out of town supermarkets will counter this. It is interesting that many food outlets Tesco, M&S and – what was the one where Argos is – Fine Fare? Left the town and now Cost Cutter next to me Eddie Gilberts wet fish shop, the new greengrocer, the new Polish – is it one in Queen Street, plus quite a few specialist food shops.

The Restaurant thing is peculiar too this weeks addition being a new pizza one in King Street.

Finally Cooke & Co that closed in King Street about 6 months ago has reopened in Queen Street.
Posted by Michael Child at 16:34