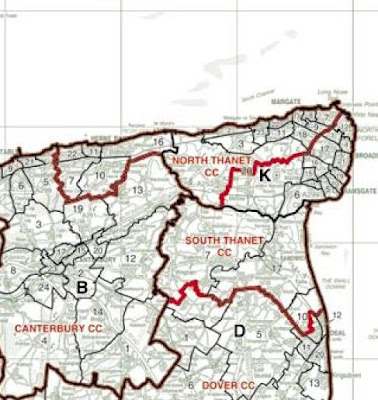 The map above shows the constituency boundaries at the last general election. 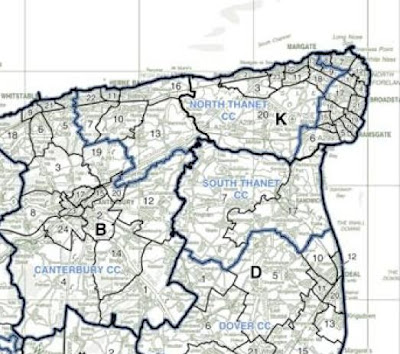 The map above shows the new constituency boundaries that will be used for the forthcoming general election.

Sorry the maps are a bit fuzzy they were the best I could find, if anyone comes across anything clearer could they send them to me and I will replace these ones.

I know this is a bit of an odd post, but as one of the youf of today asked me what the boundary changes were and I realised that I didn’t know I thought others could be in the same boat.

A major point with these boundary changes is that had they happened before the last general election, and had people voted the same way as they did then, both Thanet constituencies would have returned Conservatives.

As far as thoughts on the general election go having heard most of the major players warning us that if their opposition is elected we are in for an economic disaster I have to say this is an occasion where I find myself beginning to believe politicians.

None of them really seem to have much to say about what worries so many of us which is that our towns are becoming much more unpleasant to live in, from dangerous dogs to groups of rowdy drunks.

At the moment all of the latest polls are predicting a Conservative majority over Labour but none are predicting an outright majority see http://news.bbc.co.uk/1/hi/uk_politics/election_2010/8609989.stm

Here is the link to this mornings pictures of Ramsgate http://www.michaelsbookshop.com/410/id10.htm
Posted by Michael Child at 14:49