Work started redeveloping Ramsgate Gasworks and a bit of local and gas history. 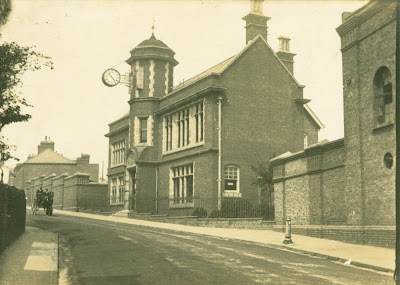 As you can see from the pictures at http://www.michaelsbookshop.com/410b/id10.htm the old gasometers are being removed, some decontamination work was done on the site about three years ago and then when work stopped I assumed we were in for years of another deserted building site in Ramsgate.

The Thanet District Council planning website is a very peculiar beast, one of the most bizarre aspects of which is that you can’t make links to individual planning applications on it, so if you want to look at the various plans for this site you will have to copy the application numbers and search the site. Be warned that some of the planning documents are large pdf files that older computers may not be able to handle.

Here are the application references, the first being the current one

this link takes you to the planning website http://www.ukplanning.com/thanet

As far as I can see they look like reasonable plans and preserve the existing listed buildings on the site. A problem here in Thanet is that the council sometimes gives consent to planning applications that are not viable, so that work never starts on the site.

The Pleasurama development being a prime example, I telephoned the contractor yesterday and was told that work is on hold again, not sure what that means, so I phoned council planning officer and was told that as far as they knew everything was still on and that architects are preparing detailed construction drawings.

Since I was also told by the council that piling was to start imminently back in January I can only assume that something is not well, probably to do with the flood risk or the cliff safety.

The main problem for me with these very big developments in Ramsgate is the lack of public information and consultation, I have heard that the Cavendish Street/Police
Station development is outstanding or pending and that application no. OL/TH/09/0853 has been, withdrawn although this has not been indicated on the planning website.

It isn’t just that people want to know what is going on in their town so that they can object to everything but much more that both the developers and the council seem to have lost touch with the fact that ordinary people are genuinely interested in the way their town develops. In many cases if both the council and the developers engaged with local people, trying to take the with them on major projects then there would be benefits all round.

The picture of the gasworks in the early 1900s is from the book that I publish COCKBURN’S DIARY RAMSGATE LIFE IN THE FIRST WORLD WAR see http://www.michaelsbookshop.com/catalogue/id73.htm

Here are the entrys from the book about the about the bombing of the gas works;

Last night they came! With a vengeance. Had just got into bed, about 10.45 p.m. on October 31st when the siren sounded and hearing the Dover guns busy, we got up and dressed. By the time we got down the stairs, the Gothas were here so we retreated to our “fortress” under the front door step, which we have had strengthened by sandbags on the steps and along the sidewall. The barrage by our own guns was again terrific and we could distinctly hear the Gothas overhead, the peculiar sound of their engines being unmistakable and quite different from the sound of our own planes. The enemy came in relays, between which we sat in the breakfast room, retreating to the cellar when the firing broke out again. Several times we heard bombs drop, one in particular with a tremendous concussion, which shook Oak Villa.

Soon after 2 a.m. as things were quieter we had a cup of tea and went to bed, but had no sooner got between the sheets than the firing broke out again as bad as ever. So we dressed again and this time waited until bugles and buzzer had sounded the “all clear”, which was not until 3.20 a.m.

17 bombs dropped at Westgate-On-Sea, but all in open fields fortunately.

Just beginning to find out the extent of the damage yesterday morning. Aberdeen House windows and roof suffered, but the houses opposite in South Eastern Road caught it worse, being very badly damaged in front. The back of the Misses Grant’s house, Hainault, [72] Ellington Road, also badly smashed, and all the crockery etc. in kitchen smashed. They have migrated to Miss Snowden’s house in [13] West Cliff Road, as their own premises are now practically uninhabitable.

At the gas works, two bombs fell between the gas holders and the rear of the office. All the glass in the rear of the offices has of course gone and shrapnel or portions of bombs penetrated Rental Office and damaged ceilings, opposite wall etc. They are unable to use this office today. Drawing office over and stores under Rental Office also badly damaged and Test Room knocked about, all bottles broken and chemicals strewn on the floor etc
The smaller of the two holders badly perforated in crown and the gas escaping caught alight and burned with such a roar that the men in yard were actually unable to hear the monitor firing, and she was firing 6 inch shells!! The fire brigade arrived and sprayed on the sides of the holder and on the guide framing, and thus preventing the holder from breaking, allowed the gas to burn itself out and avoided an explosion.

The big holder, which I remember being erected when I was at the Ramsgate Works with the late Mr W.A. Valon, was badly damaged in the lower lift, so all the storage they have left is the 2 top lifts of this holder. All the roofs of buildings in the yard are damaged, bits of the bomb having cut through 1 inch steel girders like so much cheese.

Fortunately no lives lost and no one injured. Two men crossing the yard when the bombs fell threw themselves flat on the ground and this undoubtedly saved their lives.

The pressure of gas tonight on the district is negligible – only about 5/10ths I believe (publishers note as far as can tell, please correct me if you better. The normal gas pressure at the time was sufficient to support a column of water 4 inches high so I think the referece here means that it was only able to support a column 5/10ths of an inch about a cm. high. We were unable to keep 2 incandescent gas burners going at the same time at Oak Villa and had to use candles. The bomb in Boundary Road has
fractured some gas mains and they are unable to break the leaks. The gas getting into sewers etc. and travelling some distance is of course a source of danger. About 11 a.m. today, Friday, some of this “run away” gas exploded under Sid Port’s premises in Boundary Road which were badly damaged. Bert Port, who was working in his father’s office was knocked off his stool, Sid Port, who was in the yard cutting glass was lifted several feet off the ground by the force of the explosion and the glass breaking cut an artery in his wrist. Fortunately there was an ambulance man handy who rendered first aid promptly.

They have stopped all traffic, even pedestrians in this area, the troops in the town supplying sentries for the purpose and also men to assist.

It was found necessary tonight to shut off the gas supply to Minster entirely.

Brigadier ???? Clxens and staff have been up to view the damage today.”

The authors father held a managerial position at Ramsgate gas works, you may find a little background information on gas supply at this time helpful. In the early 1900s gas was the main source of lighting in streets and people’s homes, electricity generation was still only done on a small scale some business had electric light but very few private residences. At this time, before the discovery of the North Sea gas reserves, gas was made in each town from coal the by-product being coke (a smokeless solid fuel). The gas was stored at the gasworks in holders or gasometers (huge cylindrical tanks that rose out of the ground the more gas stored the higher they got). The coal was transported by ship or railway, to as near to the gasworks as possible and finally moved by horse and cart. Most people at this time heated their houses with coal fires and cooked on a coal or coke fired kitchen range although gas cookers were becoming fairly common. Gas lighting by this time had become very efficient the gas flame was used to heat a mantle (asbestos woven about the size of the end of ones thumb) that became white hot. Coal gas fumes are not as toxic as natural gas fumes so all in all lighting a house with gas was more pleasant and effective than one would first expect. The gas itself though was poisonous, people who committed suicide often did so by gassing themselves with their own cooker. So when Cockburn talks of the men being gassed this was a serious danger.

The pictures below of the WW2 bomb damage are from the book I publish Ramsgate August 1940 see http://www.michaelsbookshop.com/catalogue/id130.htm You need to click on them and then click on them again when they open for the best definition. 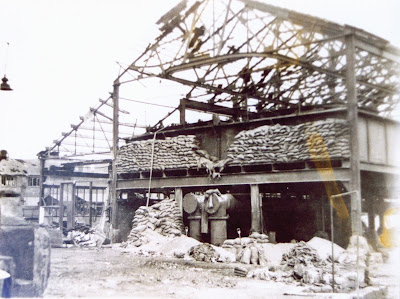 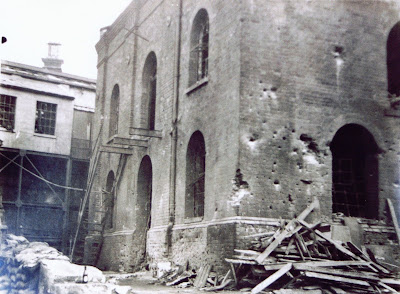 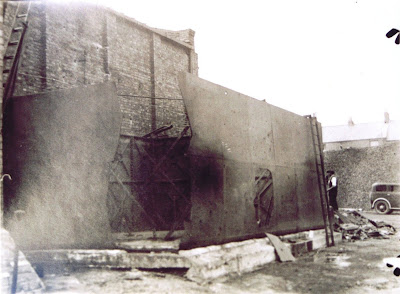 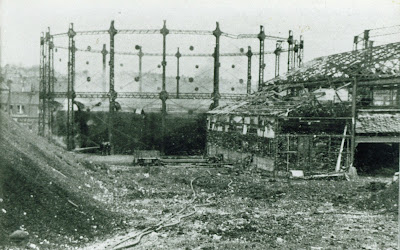