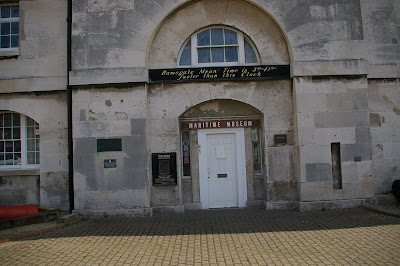 Some of you will have noticed that Ramsgate Maritime Museum didn’t open over Easter as expected, after what we thought was a successful campaign to keep it open, Thanet District Council appear to have developed a Catch 22 strategy to finish of Ramsgate’s last remaining leisure facility.

This is a sorry tale put together after a week of on and off the record discussions with councillors and council officers, I think I have now got all of the information right but am open to any corrections.

The museums artefacts and the vessels Cervia and Sundowner are owned by a charitable trust – The Preston Steam Trust - that already runs another museum.

The previous trust (EKMT now disbanded) was funded by Thanet District Council and ran Ramsgate Maritime Museum and Margate Museum on a council grant of about £100,000 per year.

The previous trust (EKMT) failed to renew the lease on The Clock House, the building in Ramsgate Harbour that houses the museum.

The council now has virtually no money or staff to run any of the museums, apart from a small amount to keep Dickens House in Broadstairs running.

The Preston Steam Trust wants to run the museum, restore and maintain the vessels and dry dock, using outside grant funding at no cost to the council.

To obtain this grant funding they need security of tenure or a freehold interest in The Clock House and dry dock.

Those who responded to the consultation said that they wished The Clock House to continue to be used as a museum.

The council then withdrew the offer of the long lease, which meant that The Preston Steam Trust couldn’t obtain grant funding to run the museum.

Of course The Preston Steam Trust can’t do this, as without security of tenure they can’t raise any funds to run the museum.

It would seem that the only option that the council has left The Preston Steam Trust, is to remove their artefacts and vessels from Ramsgate, with the current boom in UK leisure I would imagine there would be a great many towns that would welcome them.

Now at the moment Thanet District Council is run by a Conservative administration and I am being extolled upon to vote Conservative, the reasoning here would seem to be that they consider Conservatives run things better.

So here is an open question to the local Conservative politicians.

Or you think that the majority of local people would like the museum to remain open but you think it is in best interest to close it.

Or you have lost control over the actions of council officers and it is they who are running the show and not you.

Well guys and gals which is it?
Posted by Michael Child at 13:02