Pictures of the Dunkirk Little Ships in Ramsgate Harbour for the Operation Dynamo Commemorative Crossing to France May 2010. 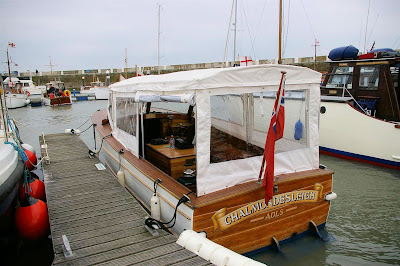 Here are the links to the pictures taken this morning

they are publishing to the internet as I write so you may have to wait a while for them all to appear.

Some thoughts on the pictures at http://www.michaelsbookshop.com/510b/id17.htm

The first event was at 1100: Dedication of the George VI Memorial Pontoon, Ramsgate Royal Harbour by Celia Sandys, Grand Daughter of Sir Winston Churchill. This pontoon was put there to display historic vessels.

I should point out that this pontoon isn’t a desirable mooring being immediately opposite the late night hostelries, it is subject to ate night noise and projectiles, glasses bottles and even on occasions pub furniture. It has no proper plumbing and a very limited electricity supply.

The idea was that by granting historic vessels free of or concessionary mooring fees an otherwise useless part of the harbour would have a display of historic vessels opposite the emerging café culture.

Recently by raising the mooring fees there until they are now pretty much the same as the rest of the harbour, Thanet District Council have effectively evicted all of the historic vessels and now have an empty pontoon.

After Thanet District Council closed Ramsgate’s Visitor Information Centre a new privately run one has opened in the Custom House, this is to be funded by an associated gift shop, which among other things will be stocking some of my publications about Ramsgate.

I was somewhat amused to see Thanet District Council officers erecting a temporary visitor information tent right outside the Custom House, as were the people running the new centre inside.

The William and Katy Johnston lifeboat.

This historic vessel is due to take part in the run to Dunkirk tomorrow and has been on one of the harbour slipways that were built for the maintenance of costal command vessels during WW2, this seemed rather appropriate to me.

She was on the slipway when I first arrived this morning, the topsides had been given a new coat of paint but not the bottom, so I was quite surprised to see her being tied up at the George VI Memorial Pontoon an hour later and just in time for the dedication.

To my mind a protective coat of paint on her wooden hull while she is out of the water is far more important than having here there to decorate an otherwise abanond pontoon.

What I feared would happen and have mentioned a few times on this blog Sundowner won’t be going to Dunkirk this time, there is a post about this here http://thanetpress.blogspot.com/2010/05/little-ship-nazis-couldnt-stop.html from some of the chaps at the council.

To me as someone with some experience with historic vessels, from a purely practical point of view, what they have to say doesn’t entirely make sense. There are two reasons for this that are visible and suggest and suggest short term fixes for this event rather than a long term concern for an historic vessel.

The first is that although all of the part you can see has been repainted, the bit under the water hasn’t, this seem a bit strange as she is out of the water but isn’t life threatening.

What is life threatening is that the sacrificial anodes haven’t been replaced, so despite what they say she isn’t ready to go into the water.

Bit of explanation, wooden boats are held together with metal fastenings (screws nuts and bolts etc) and the effect of the electricity and the salt water is similar to what happens with electro plating.

This electrical action means that the fastenings just dissolve over time and the boat falls to pieces. One over come this by fitting sacrificial zinc anodes that dissolve instead and the ones on the Sundowner are almost completely dissolved.

I managed to get out of the bookshop for a bit and take some pictures of the military vehicle display and the some of the reenactors click on the link for them http://www.michaelsbookshop.com/510b/id18.htm
Posted by Michael Child at 11:57