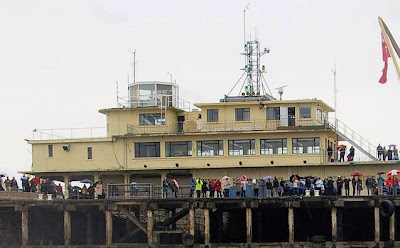 Another dull and dreary Bank Holiday on the type of weather front, we took the children to a boot fair this morning and I have just finished doing a few chores and reading the local blogs.

A few rather rambling thoughts here on this and that as I try to work out some sort of strategy to get a bit more for Ramsgate out of local government, in terms of the council owned assets in Ramsgate.

First the council leadership and cabinet reshuffle, I gather that the intention here is to reshuffle it again and that Simon Moores will probably not retain the Ramsgate Marina portfolio.

I think the intention here is to move this responsibility to the leader of the council Cllr. Bob Bayford, at the moment this presents me with something of a problem as so far he doesn’t appear to acknowledge or respond to emails.

To be fair this is just as likely to be due to some glitch in TDCIT as any intention to ignore local people. I do think however that there is some something wrong with the way that the leaders office is working when emails from local people about local issues to leader@thanet.gov.uk don’t get any response at all.

The harbour and most particularly the marina is the key to regeneration in Ramsgate and at the moment it is in a fairly rundown state, there are some fairly controversial plans for closing two of the slipways and building a leisure complex on them.

The problem here is that with competition from the ports on the coast of northern Europe it is becoming increasingly difficult to run the slipways at a profit, conversely the slipways are essential for profitable aspects of the harbour, like the expanding windfarm business.

There is also the council’s peculiar attitude to heritage, failure to grant security of tenure to the maritime museum and the reduction of the concessionary mooring fees for historic vessels, meaning that they have all left their dedicated pontoon.

I think there is a bit of a misunderstanding in local government about the way the marina and royal harbour relate to the town, tourism and heritage.

The heritage aspect of the harbour, if properly managed should attract considerable grant funding, bring plenty of tourism and make the harbour more a more desirable place for people to keep their boats than other harbours without the strong heritage aspect. Driving the heritage part away, not only makes it less interesting for tourists but also is likely to mean less revenue for the council.

Partly I think the problem is that the council has got itself into a situation where it considers that the greatest return and therefore the best way out of the present financial problems, is to view every council asset as something where they are looking at the maximum return in terms of either disposal or rental return, that will produce the most overall short term return in terms of income for the council.

The Council legal bill for fighting the Montefiore Village Green Application see http://thanetpress.blogspot.com/2010/05/council-legal-bill-hits-80k-fighting.html is a case in point. Now I know this is an opposition press release and as such may have over stated the point, the problem is however one looks at it, when adding up the figures, it looks like there is an uncomfortable parity with the amount of money the council has spent so far in a legal wrangle over selling it and the amount they would ultimately realise if they sell it. I say this setting aside any thoughts about what local peoples wishes are and just looking cold and hard at the balance sheet.

I would imagine that the council’s legal and financial departments must have understood the cost that would be incurred before embarking in this procedure.

Management of council owned assets in Ramsgate seems to have gone a bit wrong, Westcliff Hall, The Café on the end of the east pier, the dry dock, slipways and winding houses, the marina, the maritime museum, Albion House, the pavilion, the Pleasurama site, well the list could go on. Perhaps one or two of these could be excused but all of them seem too much to be a coincidence.

I am hoping that the new cabinet will have a new direction when dealing with these things. Perhaps the first step should be much more openness about what they are doing and why.

To expand on this a bit more, the thing in terms of local council assets that I have the most in depth understanding of is the Pleasurama development. Information about this comes my way in dribs and drabs and frankly much more of it doesn’t make sense than does.

Now one aspect of this that is pretty much beyond me are the financial arrangements between the council and the developer, unlike the cliff façade and the flood risk problems that I understand, up until now I have had to take the councillors word that they are taking the best advise and acting in the public interest.

It is now almost a year since that decision and still we have the situation that we have had for the last few years, when asked the council says the development will start within weeks.

No proper consultation, no accurate information for the people of Ramsgate, nothing approaching open government, but worse of all when things like this leak out and as open government becomes more widespread they surely will, no sensible explanation.

I have put this to two cabinet members, past and present, one who normally replies didn’t and the other replied with, no comment.

I should remind people that at this time the cabinet members were aware that the environment agency had strongly recommended not proceeding with the development without a flood risk assessment and emergency escapes to the cliff top.

I believed their position on this was that although they didn’t like the situation they had no alternative but to let the development go ahead even if the environment agency considered that it could be dangerous.

There is of course the issue of the cliff façade too but try as I have there doesn’t seem to be any government agency willing to comment on that one. I should point out that the various faulty bulging bits get this way because of cliff falls building up behind the concrete until there is a sufficient weight of chalk to shift and crack the concrete.

Let’s suppose that there is nothing much wrong with the cliff façade for a moment, if any of you have a few moments to spare go onto the TDC planning website http://www.ukplanning.com/thanet and look at the latest plans F/TH/03/1200 ground floor sheet 23 Jan 2009, take a kook at the lorry in the 70 foot deep 13 foot wide canyon and consider what would happen if it caught one of the protruding support pillars, for the cliff façade.

The picture is of the café on the end of the east pier, one of the long-term empty council owned assets.
Posted by Michael Child at 14:41