Sunday ramble and another old map of Ramsgate. 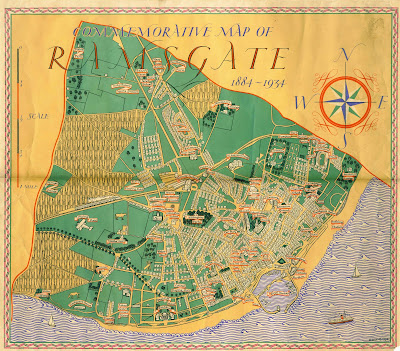 I suppose the results of the general election are fairly high in most people’s minds at the moment, so a few thoughts on that first.

I have been an advocate of electoral reform for some time, although what shape that reform should take is something I am not certain about.

Had the election taken place with proportional representation and people voted roughly the same way, we would now be being governed by a Labour, Lib Dem coalition, or at least cooperation, of some sort I would imagine.

Is that the will of the people? Well I don’t know the answer to that one.

It does look as though, at the moment, if the Lib Dems get into bed with either of the two major parties, it will be to make a short term government, members of which are likely to have made themselves unpopular, by the time we get another election, probably in less than a years time.

Certainly at the moment it does look as though, with Europe coming unstitched economically, we are in for interesting times.

I terms of local issues, I have already forewarned our new incumbent, here it Thanet South, that I will be sending her a multitude of problems and have had a positive response.

Pleasurama is still not going anywhere much, I am pretty sure that pile boring should be well underway at the moment as I was assured by TDC planning on the 13th of November last year, that this would start early this year.

Perhaps the developer is waiting like me, for some sort of written report on condition of the cliff façade from TDC, perhaps they haven’t yet had one done and I suppose they would require some sort of reassurance that it won’t collapse on them before they start work.

My complaint about this to the local government ombudsman is coming to fruition and one aspect of this surprised me; the following is a quote from their latest letter to me.

“The Local Government Act 1974 says that the Ombudsman shall not investigate a complaint that concerns something that affects all or most of the inhabitants of the area of the Council involved. It seems to me that the situation you describe affects most Ramsgate residents to some degree.”

As when I complained about the flood risk implications, they acted on this and this produced the EA letter at http://www.michaelsbookshop.com/ea/ it raises some interesting thoughts, not the least of which, is did they act outside of the act last time?

I am putting together information about Ramsgate gasworks at http://www.michaelsbookshop.com/gas/ this is in the early stages and any help on this one would be appreciated. I have just received the land registry documents for the site and have discovered that it is still owned by two different gas companies.

That’s enough about public safety issues here for one day, so on to other things.

I am hopeful that the council will be granting security of tenure for the maritime museum, before the Operation Dynamo commemorations, so that the museum will be able to be open for them and The Sundowner take part. The promise from the council to grant a 25 year lease, in the week before lasts Isle of Thanet Gazette was encouraging, but I haven’t heard any more yet.

Update I have just noticed a sign on the maritime museum saying that it and the steam tug Cervia will be open for the two days of the Operation Dynamo commemorations.

I have had a positive response from the council that the café on the end of Ramsgate’s East Pier will soon be back on the market and hopefully open again.

I may ramble on some more, depending on how the day pans out.
Posted by Michael Child at 12:48