The picture is Red Arrows, Russian Roulette, Manston Summer 1968 from the featured book. 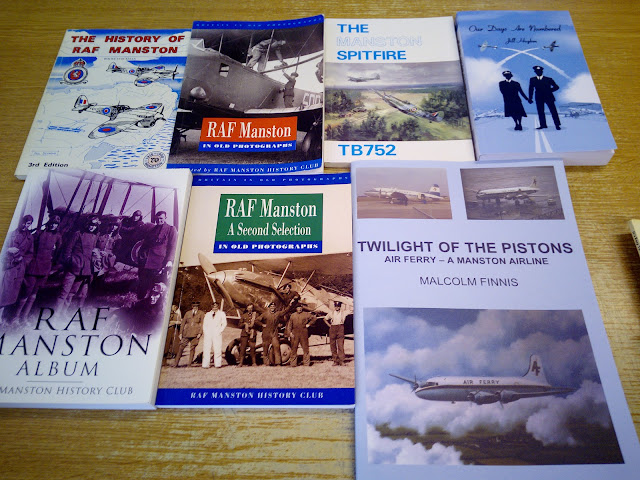 There are of course plenty of books about Manston as a military airbase, this is a picture of the Manston books on the shelves in my bookshop today.

The old question of whether there will ever be an airport at Manston is still ongoing with the possibility of a DCO still in the offing, there is much hot air about this, however the reliable updates are on the Department for Transport’s website at https://infrastructure.planninginspectorate.gov.uk/projects/south-east/manston-airport/?ipcsection=advice

What does seem to be certain is that the American real estate brokers RiverOak Investments have sold off their interests in the Manston airfreight hub DCO to a different company RSP, here is their website http://www.rsp.co.uk/

The other side of the coin here is that the site owners Stonehill Park are still getting on with their plans for a mixed use light industrial and residential development, here is their website http://www.stonehillpark.co.uk/

My own stance on the issue, which dates back over the last ten years and is all published on my blog, just click on the link and when you get to the bottom of the page click on the Older Posts link http://thanetonline.blogspot.co.uk/search/label/Manston%20Airport is pretty much sceptical support for a regional airport.

This stance has always been coupled with my feelings that were Manston ever to be an airport again it must have proper environmental controls and not be run with out an EP (Environmental Permit) like it was before.

I don’t want an airfreight hub that I can’t fly from and have never supported that, and on the Stonehill Park plans for housing and job creation it’s one again sceptical support. This is supported by the fact that the same people did pull this off with the Pfizer site, which is now the largest local source of employment.

With both of these one of the key issues is the environmental balance which is a sum that’s answer is a measure of local health and life expectancy. So if you go back into prehistoric times you had no industrial pollution to reduce health life expectancy but none of the benefits of an industrialised society to increase it. The net result of this was a life expectancy of about 35.

I can’t really say much about the plans for light industry on the Manston site as I don’t know what it would be at this stage, but the airfreight hub has taken a downward swing in the last few days.

The main pollution problem with Manston back in the days when it was an airbase was the noise. Now when it comes to internal combustion engine noise, it can be very enjoyable, I have had various classic motorbikes and cars over the years, and making the noise can be very enjoyable. There is also a spectator side to this, go to a motor race or speed trials and the noise is part of the fun, but there comes a point when even the drivers or pilots want a break from the noise.

Back in the 1950s and 60s when Manston was an American airbase the American pilots and officers were all white men, while the support staff were mostley black Americans. The aircraft noise was over the town of Ramsgate, while Margate was both quiet in terms of jet aircraft noise but a lively seaside town in terms of entertainment.

The American air force officers produced what to them (at the time) was the obvious solution, a color bar or racial apartheid based on skin colour. With Margate being of limits to coloured Americans [black Americans] and white Americans not going to Ramsgate where the black Americans were and also the aircraft noise.

This link takes you to one of the newspaper articles http://www.michaelsbookshop.com/blogpicts2/id71.htm

Anyway the news articles this time around relate to diesel fuel and the particulate pollution, the little particles that it produces which lodge in your lungs if you breathe the fumes in and reduce your life expectancy.

Jet engines burn avgas which is much worse that diesel engines on the particulate pollution front and particularly a problem in the area upwind of where it is burnt for about a distance of seven miles.

Now a 747 type freight plane burns a ton of avgas during each movement, either landing or takeoff, I don’t suppose I have to explain the prevailing wind direction in Thanet, draw a diagram, talk about turkeys voting for Christmas etc for you gentle reader to see the problem.

Of course when Manston closed we were all being encouraged to buy diesel cars, but now assuming a 747 movement took half an hour, it does make you wonder how many diesel cars it would take to burn a ton of fuel in half an hour.
Posted by Michael Child at 15:53