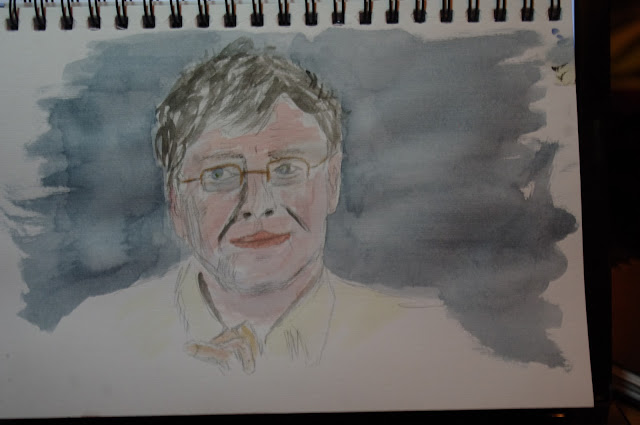 The portrait of Bill Gates, sketch is probably a better word, is one of several I drew of both men while watching this rather dated video of when they were interviewed together in 2007.

Of course Steve Jobs is dead now and somehow I had missed this interview which I found interesting as I suppose these two men are behind most of the technology that we all use now.
Sorry if you weren’t expecting this rather geeky post and I doubt many will bother to watch the interview, which goes on for ages, yet I suppose it is very much key to the way the world has changed so much in the last fifteen years.
Sorry I didn’t quite catch Bill Gates as well as I wanted to, he isn’t an easy person to draw, a lot more shading would have produced a better likeness but it is the lines that separate him from the rest of humanity that interest me. Perhaps I will have another go another time. 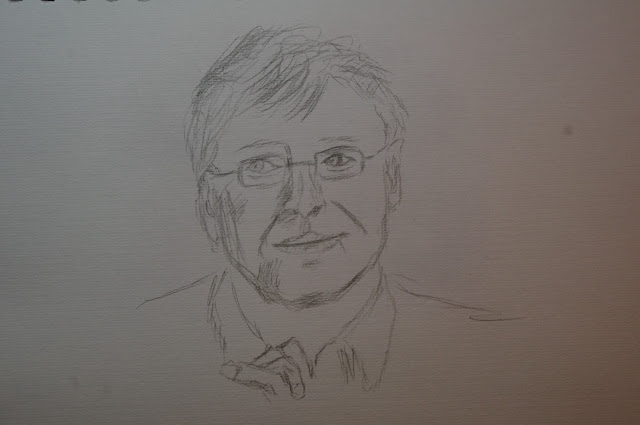 Here is the pencil sketch of Bill Gates before I coloured it in, pencil sketches don’t photograph that well hence the colour.
And here the video if I can get it to embed

Well the sketches were drawn while watching the video, I won’t bore you with the others and am very wary of copying photos from the internet for copyright reasons, not quite sure what to say about the video as I have just finished watching it.
I think it something to do with personal computer technology having reached some sort of watershed where I can’t imagine really needing much more than a few tweaks to what I have now and what was talked about in the interview.
I can’t see really what I am going to need beyond the laptop I have now and the internet phone I have now, in terms of groundbreaking innervations. Well it’s something like that, the beginning of the end of an era, not sure.

I think this has something to do with technological futures, I think sometime in the 1890s or 19 0s it became clear that the telephone would change the world 1920s or 30s maybe later it became clear that radio and then television would, working in electronics and on computer projects in the 1960s and 70s it was clear to me and the people I was working with that computers would change the world sometime in the 1980s or 90s I think most people realised that the internet would, sometime in the 20 0s it became clear that the mobile internet would, but I don’t really know what’s next, I think perhaps for the first time in my adult life, I cant really pin down the next personal technological breakthrough.
Posted by Michael Child at 22:44