Saturday, walk in Ramsgate, pictures, even pictures of pictures and a bit of a ramble on about this and that. 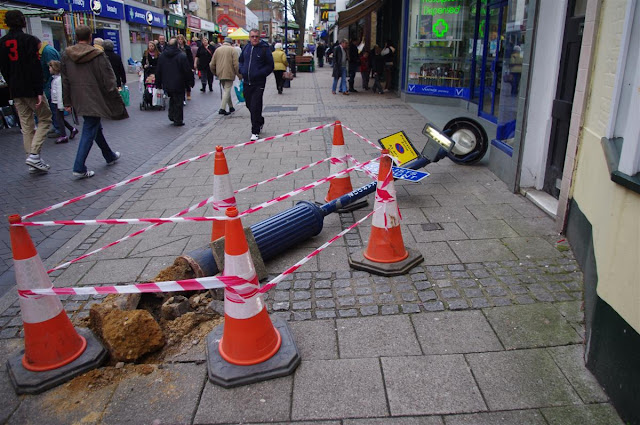 One way or another I haven’t managed to get out much this week and so I went out this morning leaving the bookshop in the capable hands of the chap who works for me on Saturday.
As is my usual habit the whole contents of the camera card are here
http://www.michaelsbookshop.com/112/id3.htm
and here
http://www.michaelsbookshop.com/112/id4.htm
the wind that was forecast didn’t seem to blow much so it was very pleasant indeed. A few thoughts on the first batch of photos.
Once again the Pleasurama development is something that causes me to speculate about what it is that is going on, on site. Obviously there is no point in me asking the people involved for temporary for temporary leisure use this summer as we now have all the concrete posts on the site.
Interestingly they are now working far enough down the site towards the lift to be where the cliff façade is much more dubious.
Here the design drawings and in this case I am certain that the council have supplied me with the right ones, show that there should be foundations that would have required digging out above the load spreaders.

Well they new have an updated HSE notification extending to about March 2014 although is still suggests there should be 200 people working on the site instead of the maximum of four we have become accustomed to.
I took some more Great Wall of Ramsgate pictures, can anyone spot the one that has been painted out?
On to the next lot.
A lot of activity in the outer harbour, presumably to do with the wind farms, some rather dubious looking cracks appearing in the top of the east pier, lets hope the sea doesn’t modify it again. The has obviously been some sort of fire at the back of the pavilion. The British Heart Foundation charity shop in Harbour Street has had the door glass and a window broken.