Thanet District Councillors on the Weed. 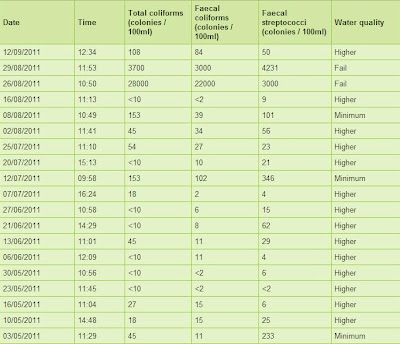 Two of our senior councillors posting about seaweed and pollution in two days, see Clive Hart at http://thanetpress.blogspot.com/2011/11/walpole-bay-water-quality.html and Simon Moores at http://birchington.blogspot.com/2011/11/walpole-bay-water-mystery.html seemed a bit excessive so I thought I had better look into the issue.
Above are the bathing water quality figures for Walpole Bay, what the Environment Agency is measuring here in simple terms is the amount of poo in the sea. If I put my science hat on for a moment I would call it, faecal coliforms and faecal streptococci, although this sounds pretty nasty, faecal coliforms and faecal streptococci, are not actually harmful. They are just bacteria that live in human and animal poo and their presence in sufficient quantities in seawater tells us that there has been a sewage discharge nearby.
Swimming in diluted sewage is harmful, so you would think that there would be effective measures in place to stop this from happening. Here in Thanet we have three ways of knowing when there is sewage in the sea, listed below.
1 Weekly seawater tests, the results of which are shown in the table above. I think it fair to say that these tests would only show significant problems if conducted within a day or two after a sewage discharge. So if a test is conducted on Mondays then only discharges made on Saturday, Sunday and Monday before the test would be likely to show up.
As these tests take several days to perform because the bacteria has to have time to grow, they can only be used as a general indicator of bathing water quality throughout the bathing season. They would for instance show if there was a significant discharge coming from a source that the EA, council and Southern Water didn’t know about. What they wouldn’t do is to tell you if there was sewage in the sea on any given day.
2 The emergency sewage discharges made by Southern Water. These are either due to equipment failure, in simple terms, when the pump breaks down so they can’t pump the sewage to the sewage works, they send it down a pipe into the sea. Or they are due to heavy rain, which in many cases goes down the same drains as the sewage and if the rain produces more water than the system can cope with, they send it down a pipe into the sea.
The problem here is that there is no proper communication between the council and Southern Water, so although Southern Water know when they have sent sewage down the pipe into sea, somewhere along the line this doesn’t get as far as a chap from the council going and pulling down the blue flag and putting up a brown one.
3 Common sense, if we have had exceptionally heavy rain then there is likely to be sewage in the sea for a day or so afterwards.
The seaweed is a different issue altogether, the basic rule here is that it is more likely to be dangerous to smell rotting seaweed than to swim in the sea near it, the rotting seaweed for instance that smells like rotten eggs is likely to be giving off hydrogen sulphide, a gas that in sufficient quantities can be lethal.
Like so many things in nature, we have evolved to find things that harm us repulsive and have survived by avoiding them, in simple terms, potential ancestors that liked the smell of rotting eggs probably didn’t survive to produce offspring.


Below is a list of some of the chemicals released into the sea from the Weatherlees sewage treatment plant outfall pipe east of Walpole Bay in 2010.

The list above looks pretty bad I know but frankly it is typical for sewage outfall pipes thought the civilised world.
The real problem here is one of what happens when us the public have to pay for a service without any choice, in this case Southern Water and Thanet District Council, we have no option but to pay them to provide services for us. In this instance both organisations spend our money, and in terms of ticking the boxes it looks as though they have done all of the right things to ensure that we don’t wind up swimming around in sewage. But and it’s a very big but, the chain of communication between the two people actually doing a physical job of work, the engineer who discharges the sewage and logs it, and the lifeguard pulling up the blue flag, breaks down as it passes through the bureaucrats shuffling the paper in both organisations.

The loss of several of our blue flags this year was due to water quality sampling last year, not so much that there were a few days a year when the bathing water was polluted, this is something that is going to happen pretty much everywhere in the civilised world.
What should have happened on the few days last year when emergency discharges were made was that the people involved should have been told, the council should have put up signs telling people not to bathe and of course the Environment Agency shouldn’t have take their samples on the days immediately after the discharges.
Posted by Michael Child at 12:12