I guess looking at the picture of The Red Arrows playing Russian Roulette over Manston in 1968 most people would concede that some things people do with aeroplanes are more likely to reduce your life expectancy than others, but this doesn’t necessarily stop people from doing them.

Now this April the government brought out a report called “Estimating Local Mortality Burdens associated with Particulate Air Pollution” here is the link to the report http://www.hpa.org.uk/webc/HPAwebFile/HPAweb_C/1317141074607

This report has resulted in various newspaper articles, along the lines of memento mori, news articles are often like this, particularly if the journalist has just woken up, the appropriate phrase is something like; sic transit gloria vino.

Anyway I sought to try to work out whether there were particular particulate air pollution issues related to a freight hub at Manston, for this I used Monday’s blog post http://thanetonline.blogspot.co.uk/2014/04/manston-airport-closure-issues.html where William Epps acted as a devil’s advocate and helped considerably with my understanding of the situation.

This particulate air pollution is mostly associated with burning fuels like diesel and jet engine fuel, I for instance live by a bus stop and vaguely wonder if the fumes from the busses will knock a few hours off my life. William lives in Broadstairs where one of the main dangers to health is probably the folk festival. The conversation meandered something along the lines of; Michael sic at omnibus William sic in at.

Airport pollution is no new thing although with Manston it’s mostly been noise pollution. In the 60s the noise pollution lead to the American Airforce trying to introduce a color bar, this particular form of apartheid was supposed to work along the lines of Margate is off limits to our “colored boys” they can use Ramsgate where we are making all the noise with our jet fighters and bombers, and wot, can you speak up a bit? here is the link to some of the newspaper articles about this http://www.michaelsbookshop.com/blogpicts2/id71.htm

Anyway coming back to the air pollution, the report says we have higher levels in Thanet, trawling the internet this seems to be due to a mixture of the prevailing wind direction blowing across southern England where all those nice people are rushing around in 4x4s and lorries, the dispersed emissions are in the air blowing this way, pockets around busy local road junctions can be bad.

On the remember you die bit (I may dream in latin but am waking up now) anyone who has hung around the odd nearly departed will notice that it is often breathing that is the problem. The oxygen bottle being much in evidence and the quacks asking did uncle Fred ever smoke, I guess now they will be asking if he lived near a busy road junction too.

Anyway the Manston questions that seem to be mostly unanswered, that relate to the latest notion of a major cargo hub, rather than a regional airport you can actually fly from, are. 1 How many of the big cargo plane movements that burn about a ton of jet engine fuel in the local area would Manston need to make a profit? I think the answer is around 60 a day; a bit of a heavy smoker. 2 Does Manston have the infrastructure, plane parking and so on, to actually be able to operate the required number of flights so make a profit? 3 Would burning 50 to 100 tons of jet engine fuel a day in the Manston area reduce the life expectancy of people living upwind, which is mostly in Margate, Cliftonville and Broadstairs? 4 How much time would knocked off their lives, if this is the case, would people give up to secure say 200 local jobs, a week, a month, a year or two?

Anyway the admission of failure, the answer is, I just don’t know the answers to any of these questions. The bottom line being that while I support a regional airport, I am still very uncertain if I support a major airfreight hub there.

The picture above comes from the book Twilight of Pistons that I publish, Red Arrows, Russian Roulette, Manston Summer 1968 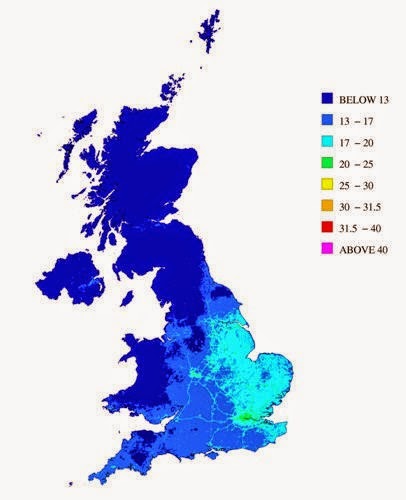 This map relates to an answer to one of the comments
Posted by Michael Child at 09:23