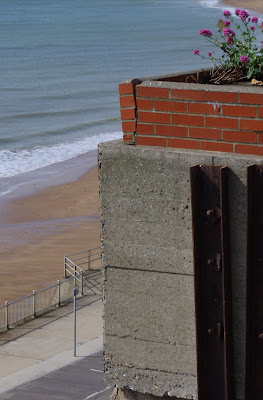 Today’s pictures from the camera card, via my notebook with the very small screen so I haven’t seen them properly prior to publication so apologies for the bad ones in advance.

and the Dickens Festival ones here, I will add them to the rest when I get time

I know that there are people who just like to follow the pictures and my rather aimless meanderings and I also know that I have been rather lax in putting them online recently.

The main observation today was yet another cliff safety problem here in Ramsgate, the picture above is a detail from one of the ones in the first batch, link above, shows part of what I am concerned about.

This relates to the part of the cliff above the new extension to the rebuilding of the Granville Marina Restaurant as flats.

Since they started on this building I have been impressed by the quality of the build but have been expressing my concerns about the cliff structure behind the extended part.

What you can see in the picture is a few bricks being displaced by vegetation growth and I would think anyone can see that eventually they will fall off if left unattended. This is a relatively minor side effect of the whole problem, the chances of there being someone underneath them when they fall is not that great and I would say an absolute worst case scenario it that when they fall they would kill a couple of people.

What worries me considerably is that the condition of this brickwork shows that the much larger concrete lump the bricks are sitting on, hasn’t been properly maintained and like the Pleasurama site the intention is that local people will be living where the debris would fall if a large part of it collapses.

With the Pleasurama site there is the added problem that the council benefits financially from the development of the site.

With the Pleasurama site I think the thing that worried me most was the business of me crying wolf over the undermining of the arched part of the façade, strangely the council seemed quite happy about this. However the fundamental problem here still hasn’t been resolved and that is that the council and the council’s consulting engineers carried out a cliff survey and a £1m repair based on the same information that caused me to report this part of the façade as being dangerous i.e. that the panels between the arches were block when in fact they are cast concrete.

In other words both the councils engineers and their consulting engineers made safety predictions, carried out a major survey and repair contract without understanding the basic construction of the structure. Or they spent a lot of our money surveying and repairing a brick house, then pronounced it safe, when I came along and said to them actually it’s a wooden house, their reply was, oh so it is, but is still safe.