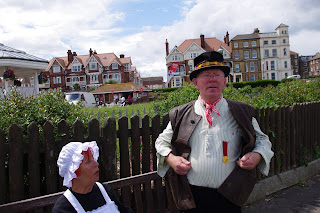 With the very uncertain weather and primary school children I was limited by what I could cover this weekend, I did manage to get a few snaps of the Dickens Festival in Broadstairs yesterday afternoon.
The links to the pictures are below:
http://www.michaelsbookshop.com/dickens2011
with a few shots of on the way in and out of Broadstairs here.
http://www.michaelsbookshop.com/dickens2011/id3.htm
This festival is on until Friday and I will try to get some more if I get a chance.
I am sorry that I didn’t manage to get to Margate and photograph the big event, hopefully plenty of other people have and lots of pictures and videos will appear online soon.
A considerable problem is one of cameras and water, covering an event like this I would need to take three cameras with me, one ordinary one (the one I used to take the Broadstairs pictures with) one video camera and one with a long lens on it to take pictures of the planes with.
I had the one with the long lens ready and every time I saw a plane I took some pictures of it, this would have been effective if I had been in Margate, however as you can see the pictures of the Red Arrows performing over Margate, taken from my garden in Ramsgate ate not really very effective, here’s the link.
http://www.michaelsbookshop.com/dickens2011/id4.htm
this is made much more difficult because due to the time sound takes to travel you don’t actually hear them until they have gone.
Anyway my point here is that if you are carrying all of this photographic equipment it is beast to avoid heavy rain, what with that and my children wanting to dress up as Dickens characters I had no hope.
Posted by Michael Child at 13:34