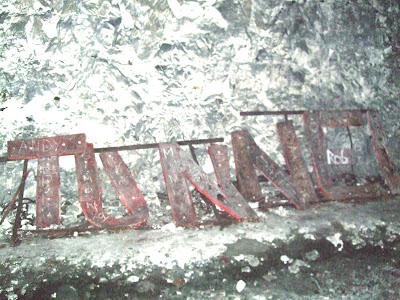 The number you need to phone is 0871 626 88 55, you can do this up to 10 times from one phone number. Calls cost 11p from a UK landline, when you dial the number it rings for a bit and then you get a recorded message saying that your vote has been registered.

What are you voting for?
Funding to document and survey 3½ miles of historic manmade tunnel structures within the Ramsgate area in order to restore and preserve them as part of an all-weather, year-round tourist and heritage project. The survey will properly document the entire tunnel system so as to clearly define its true condition, collate and archive all the available documentary evidence and draw up a workable business plan to develop them as a heritage attraction and educational resource.

How long have you got to vote?
The phone line opened at 9am today and will stay open until midnight tonight.

How do you get involved?
Ramsgate Tunnels Website http://www.ramsgatetunnels.org/

What were these tunnels dug for?
Ramsgate and a lot of this part of the country sits on chalk, as well as giving us our white cliffs and providing underwater reservoirs of fresh water, this chalk is easy to tunnel and remains strong and sound after it has been tunnelled.
This whole area is full of caves and tunnels some of them dating back to prehistoric times, apart from the main tunnel system that this is about there are many other smaller tunnels and caves under Ramsgate.
The history of this system of tunnels dates back about 150 years and started because of competing Victorian railway companies, the railways first came to Thanet via Canterbury to a station in Ramsgate at the top of the High Street, the other end Of Station Approach Road to where the station is now.
This was the South Eastern Railway that arrived in Thanet in 1846, later a spur line was built across the island to Margate.
Around 1860 The London Chatham and Dover Railway extended their line form Herne Bay, via Margate and Broadstairs to Ramsgate, their new station was on Ramsgate seafront where the Pleasurama site is now.
This was reached by 1124 yard tunnel from Dumpton Park to the base of Augusta Stairs in Ramsgate, this is a virtually straight tunnel big enough to take two standard sized railway tracks that slopes between the railway cutting near the bridge at Dumpton Park to Ramsgate seafront.
When the two railway companies were amalgamated under Southern railways and in 1926 the existing station was built in Ramsgate, a new link line between Dumpton and the new station built, Sands Station and tunnel closed.
The Sands railway station was bought by the town corporation and used as an amusement park, they were also keen to find some use for the tunnel and in 1936 a spur tunnel was dug from the existing tunnel to near Dumpton Park railway station and a narrow gauge scenic railway opened between there and the seafront.
During the Fist World War Ramsgate was one of the most bombed and shelled towns in the country and when the Second World War Started this tunnel system was extended to provide a linked series of air raid shelters for the whole town.


Books related to the Ramsgate Tunnels.

I have various local history books available now in my bookshop that cover aspects of the Ramsgate Tunnels.
The Ramsgate Tunnels, Main Line Air Raid and Scenic Railway, by Nick Catford, Published Michaels Bookshop 2005 £4.99
Ramsgate All Change, Railways in the news at Ramsgate, by David Richards, Published Michaels Bookshop 2008 £7.99
Midst Bands and Bombs, ABC Kempe 1946 reprint Published Michaels Bookshop 2006 £5.99
The Ramsgate Underground, by Terry Wheeler, Published Terry Wheeler 1999 £2.25
Ramsgate has the World’s Finest Shelters, by Phil Spain, Published Phil Spain 2011 £4.99
Who owns the tunnels?
Thanet District Council own the tunnels, I have complained to them that they haven’t even put out a press release about this, which is after all a national TV Peoples Millions event to raise funding to survey a council owned asset
I will add to this one today with a short history of the tunnels and a more detailed explanation of the voting process.
Posted by Michael Child at 10:35