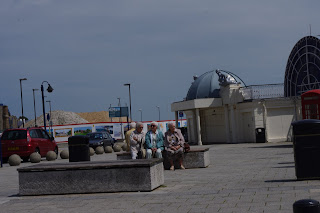 A few pictures at taken yesterday, see http://www.michaelsbookshop.com/611/id5.htm with a few notes here on them.
Granville Marina Restaurant is coming on a pace although my concerns about the cliff maintenance behind the extended part don’t seem to have been addressed yet, everything else about it looks ok.
The Pleasurama development seems to have pretty much ground to a halt, at the pace they are moving I would think it will take several decades to build, it is a great pity that the other parts of this prime site are not being used for some sort of visitor attraction while the delays continue.
Something has gone wrong with one of the outfall pipes on the main sands so that whatever fluid is in it, is coming up through the beach. Obviously after heavy rain there will be discharges from overflow and emergency outfall pipes, I would say that this happens pretty much everywhere and isn’t peculiar to Thanet.
The problem in Thanet though seems to be a lack of local coordination, so that if there is some sort of contamination no action is taken. The tests go on with out any qualification, so we lose our Red Flags (sorry correction, it’s red rags and blue flags isn’t it, I should have written Blue Flags)  . No warning signs go up when the sea is known to be contaminated by a discharge, so people lack confidence they are swimming in safe water. In short all of the work is being done the tests being done the discharges being recorded, but lack of basic coordination means that it is all pretty much wasted.
Ramsgate Maritime Museum is still closed and I will try to find out why, the prominent council owned assets in Ramsgate are becoming something of a local joke.
A jewellers shop that was in Margate High Street have moved their shop to Harbour Street in Ramsgate and will be open soon. A sad side effect of Margate High Street declining to the point that it isn’t possible for them to trade there any more.
The community café in King Street Ramsgate that was run by the charity Mind and suddenly closed seems to be being opened by another charity The Skillnet Group, who support people with learning difficulties.
The last picture shows the bad state of King Street, of course much of this is down to the council not implementing the “Impact” pedestrianisation project properly and as the public consultation wanted.
On to the blogs.
An interesting comment on the last post from by John Hoyler pointing out that Laura Sandys has asked a question in parliament about the export of live animals through Ramsgate harbour.
As far as I can see the council don’t have any animal welfare policy in place, which is something they may have to look at. As I have pointed out before as a drinker of cow’s milk I haven’t really got a leg to stand on over this, the majority of live animal exports are due to all of the unwanted calves produced to ensure milk production and the lack of demand for veal in the UK.
With four children and a limited income, I am afraid it is a case of doing ones best but economic restrictions mean we have to consume products that support farming practices that are the norm for the majority.
Blog post of the week has to be Thanet Waves “Who is the sexiest councillor” see http://www.thanetwaves.co.uk/2011/06/who-is-tdcs-sexiest-councillor.html what a choice.
Newspapers.
The Isle of  Thanet Gazette and Thanet Times website seems to have gone totally down the pan, even the papers journalists don’t know how to find the recent articles there.
Your Thanet that stopped being a paper newspaper recently and now only have an online paper with very little local content apart from press releases mostly from the council, have started sending me spam emails.
Thanet Extra seem to be pretty much the same as usual see http://www.kentonline.co.uk/thanet_extra/news/todays_news.aspx
The problem of how local papers deal with the internet is a very tricky one and I think goes back many years to when local papers first started to produce free papers, the idea being that the advertising would pay for the journalism. What started out with the odd free paper has had its up and down spirals


Ultimately the problem with the internet is as once something written has become an electronic file, how do you get anyone to pay anything for it? From this follows the question, how do writers get paid?

I write what you read here during odd moment in the bookshop when I wouldn’t be doing anything else and have never considered deriving any income from doing so, but for the people who derive their living from writing this is a serious problem.

After some fiddling about I think you will find the following link takes you to the online versions of most of last Friday’s Isle of Thanet Gazette stories http://www.thisiskent.co.uk/people/Isle%20of%20Thanet%20Gazette/profile.html
Posted by Michael Child at 16:57