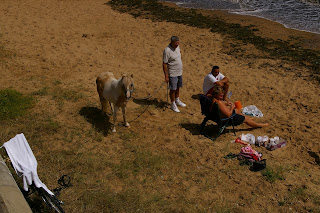 There is a council meeting tonight to theoretically decide the future of Arlington House in Margate, in practice is suspect that the meeting will only put the decision off to a later date.
There is plenty on in Thanet this weekend and the weather forecast is looking a bit dodgy especially for Saturday when here in Ramsgate we have Love Music Hate Racism see http://lovemusichateracism.com/2011/05/kent-love-music-hate-racism-carnival-june-18th-ramsgate/ in Broadstairs we have the start of Dickens Week see http://www.broadstairsdickensfestival.co.uk/ and of course the first day of The Big Event in Margate, if this ahs a website I can’t find it there are odd pages on the council’s website but nothing comprehensive.
Saturday I will be working but may get a chance at taking a few photos of the Ramsgate event, Sunday I may try to get over to Margate to The Big Event and take some pictures.
It’s been a funny old start to the blogging week, the council seems to have gone completely potty over the way they dispense information, the way I am reading it the only way a member of the public can access information from the council, under the new rules is via a freedom of information request.
The only exception to this is council accredited media, it would seem that the only way one can even find out what criteria media would need to be accredited by the council is via a freedom of information request.
A government selected media where as far as I can see the main selected media receives considerable advertising revenue from the government sounds like something that would only happen in some sort of oppressive dictatorship.
One is inclined to imagine the tourist arriving in Ramsgate and asking when the museum is open, only to be told to submit a freedom of information request and expect the answer in about a month.
Sounds like something out a novel about the dictatorship in some banana republic, doesn’t it? I don’t think it is so very far from the truth though, I had a couple of tourists in my bookshop today who had had an encounter a bit like this.
I will ramble on if the mood takes me.
Posted by Michael Child at 21:15