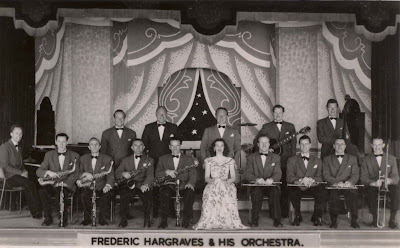 I received the picture above this morning, can anyone answer Geoff’s question?

I called into you bookshop about a week ago and said that I would send you the attached picture. My sister, who is now in her seventies found this postcard with some old photo's. I imagine that it was taken in the Westcliff Hall in the early 1950s.

Having spent several holidays in Ramsgate in early to mid 1950s. My dad was, at that time a keen fan and would drag us along to either the St Lawrence bandstand or the above mentioned hall several times during our annual one week stay to hear this band play. Bearing in mind that I was still quite young, I was born in 1946, I seem to remember that their musical standard was every bit as good as dance bands heard on the radio at that time the usual bit of bawdy seaside comedy thrown in for good measure. By the late 1950s their style of music had gone out of fashion and they had gone also. Do you know if Mr Hargraves/ Hargeaves was a local man? There is a passing reference to him in This England's book of dance bands Vol 2 and minor reference to him Who's who in British Jazz.

Geoff
Posted by Michael Child at 09:08