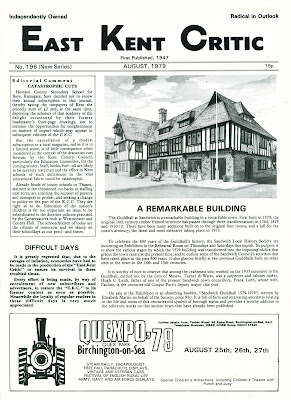 More of The East Kent Critic the radical local newspaper that first started in 1947 and ran until 1948 was restarted in 1963 and ran until 1985.
It was edited by the Labour councillor Derrick Molock and partly funded by the Conservative MP Jonathan Aitken from 1980.
It is a mixture of local history and politics, something akin perhaps to today’s Thanet blogging scene.I have just received permission to reprint it and have most issues from June 1969 to 1985 but am missing many of the earlier issues.
I have just published the whole issue from 30 years ago on the internet click here to read it
If you don’t hear all that much from me over the weekend I am a bit tied up with the family.
Posted by Michael Child at 10:29