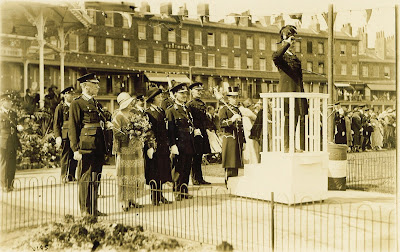 Some of you will probably have noticed if you keep an eye on http://thanetpress.blogspot.com/ or regularly delve the TDC website that back on Thursday, 18th June there was an item about blogging on the standards committee meeting see http://tdc-mg-dmz.thanet.gov.uk/Published/C00000117/M00001611/$$$Agenda.doc.htm item 11. is a Draft Protocol on Blogging, it says “Report to follow” apparently it hasn’t followed yet, however councils are not noted for their speed of action so I will let that pass.

“R74 Draft Protocol on Blogging
The Monitoring Officer reported that a draft protocol was with Group Leaders. The protocol would be for guidance only. If a Councillor byeline is used on a blog then the code is engaged; so advice is required to blog within the Code of Conduct. A protocol will be produced after consultation with councillors.

Miriam Sarrafan reported that Harlow LA has produced a protocol which is in the public domain.

Resolved: the Monitoring Officer would report on progress at the next meeting in September.”

Anyway following the true Thanet spirit of plagiarism I suspect when they eventually appear there will be some similarities with what Harlow Council have produced, so here is what Harlow have to say, I should warn you that the following link takes you to a pdf file that may not agree with your computer’s digestion.

At http://www.harlow.gov.uk/pdf/communications%20protocol%20revised%20-%20item%209.pdf where they they say:

“2.4.4 Blogs
Staff are reminded that blogs are governed by the provisions of this protocol as they are any other medium of communication. Consequently any communication in work time regarding the Council or an individual’s role as an officer through the blog will be regarded as being a statement to the press or general public. Also Officers must consider whether any blog updated in a private capacity (that is in an Officer’s own time) contains information that could be considered to bring the Council (including Members and colleagues) into disrepute or divulging confidential information.

Members are entitled to maintain their own blogs and are responsible for their content. Any blog that is linked to the Council website must comply with the Council’s Code of Publicity Practice and media related legislation. During the purdah period prior to normal elections these blogs will be disconnected from the Council website. However at times of by-elections such connection may be retained depending on the individuals non-engagement in the election process. The blog author is responsible for ensuring compliance and for moderating comments posted on to the blog.”

I suppose my point here is that with the Labour group saying that this is a ploy to gag Labour councillors and the Conservative group saying it isn’t, why don’t they just publish the draft protocol on the internet so everyone knows where they stand.
Posted by Michael Child at 10:42