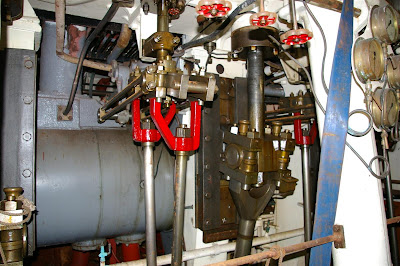 A few pictures of the steam tug Cervia that I took today, restoration work is well underway and she should be open to the public next month as soon as she has been made safe.

I am sorry that some of them didn’t come out too well and I will endevour to delete the worse when I get time.

Do feel free to enhance any you like, let me know if you want any in high definition please quote web address as the top if the page (url) and send me the picture so I know which one it is.

No need to ask permission to use them just credit me and include this blog post address http://thanetonline.blogspot.com/2009/07/steam-tug-cervia-in-ramsgate-herbour.html so people can look at the other ones.


The pictures there are about 200 of them Click here to look at them use the links at the top of the pages for more pictures.

I also took some video footage on the Cervia embed here, sorry there is no voice over, walking round the works of a steam tug while trying to see where you are going through the viewfinder of a camcorder it would have been something like this:

Sorry about the bit where the video goes all blurry for a moment, I had a senior moment with some technical part that was harder than my shin.

I gather that volunteers can get involved with this project and would recommend standing alongside and hailing ahoy Cervia would be a good starting point.

The hull doesn’t appear to be leaking, hardly a drop of water in her when I sounded the well and that tasted a little brackish but definitely not pure seawater, a bit oily too, I believe this came mostly from leaking hatches on the decks.

One has to appreciate that the hull plating of a tug is much thicker than most vessels due to the impacts they encounter when working.

From what I can see of the engine and boiler they seem to be in fairly good order.

Parts of the hull are definitely rusted and a little thinner than they should be.

I have some experience of boats and engineering so this isn’t just wild guess work.

I believe the plan is to slip her in Ramsgate next year and replace the plates that need it, by riveting not welding.

the craft of hull riveting has all but died out so this should be a major international tourist attraction.